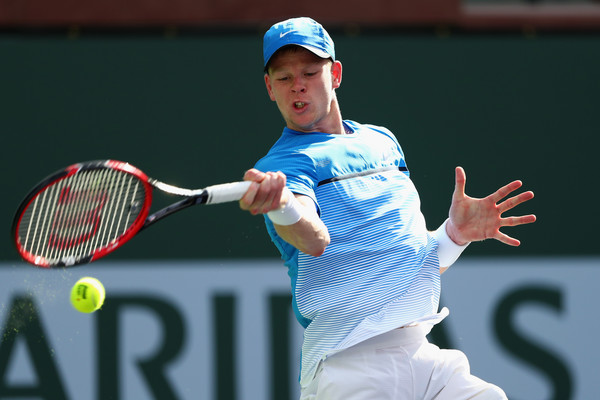 The opening round at the Monte Carlo Rolex Masters saw a battle of the Brits take place out on Court Des Princes as Kyle Edmund got the better of his Davis Cup team mate Dan Evans 7-5, 6-1 in their first meeting on the ATP World Tour.

It was the British number two, Evans, who made the better start, securing a double break and a 4-1 lead after Edmund produced countless unforced errors. However, the British number three was able to steel up his game and his ground strokes began to find the court more frequently. This sparked a comeback from the Brit which would see him win six of the next seven games, 12 of the last 14 games in the match in all, as he wrapped up an in the end comprehensive victory.

The all-British encounter between Edmund and Evans began with three successive breaks of serve, with both players struggling, particularly Edmund who fell down 0-40 in the third game, saving one break point with a huge forehand, before dumping a shot into the net on the next point.

After a comfortable hold from Evans, his compatriot looked to have settled on serve in game five as he moved to a 40-0 advantage. However, consecutive backhand winners from the British number two put Edmund under pressure at deuce. Edmund squandered another game point before Evans out thought his opponent in the extended rallies, breaking for the third time in the match.

After a disastrous start, Edmund responded impressively, reeling off four games in a row, breaking his opponent twice to get right back into the set. Evans held to love to stop the rot and levelled up at 5-5, but the British number three’s consistency had much improved and his forehand found the mark, enabling the Brit to break serve with a cross court forehand passing winner to seal the first set 7-5.

Evans had the chance to make the perfect start in the second set after earning two break points, but the British number two was unable to capitalise.

Having missed that opportunity, Evans chances of reaching the second round all but ended as Edmund took full control, winning four games in a row to take a 5-1 lead. When serving for the match the British number three squandered three match points and Evans also missed two opportunities to break back in a tense seventh game. After both players missed chances it was Edmund who closed out the match with an ace to finish, sealing a 7-5, 6-1 victory in one hour and 20 minutes. Next up for the Brit, a second round meeting with defending champion Rafael Nadal.