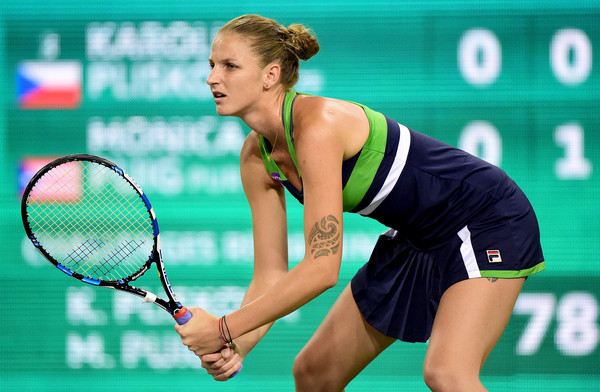 The first set was a disaster for the world No. 3, as her Puig redlined, and Pliskova was unable to do much damage with her famously good serve. But she pulled it together for the last two sets and, just barely, came away with the victory.

Puig came out looking to end points on her own terms, and her dominant backhand allowed her to break Pliskova’s serve in the first game. On Pliskova’s next service game, Puig crushed forehand winners and took a 3-0 lead.

But then Pliskova showed at least some sign of life, breaking for 3-1 after Puig missed a forehand into the net. Puig, though, retaliated with a love break on a crosscourt forehand winner.

Puig then held to make it 5-1 and broke to win the set when Pliskova netted a forehand.

The second set was quite a change of pace. Pliskova broke Puig’s serve in the first game when the Puerto Rican missed a forehand long. However, Puig broke back in the next game, in part due to the two Pliskova double faults that came at the game’s tail end.

The break-fest continued when Pliskova hit a return winner to go up 2-1. And in Pliskova’s effort to consolidate, Puig seemingly could not get her opponent’s serve back in play, letting her take a 3-1 lead.

The players exchanged holds for the remainder of the set, and Pliskova won it 6-4.

The beginning of the third set was all Puig. She held in the first game on a backhand winner, and then Pliskova handed her the second game with a backhand into the net and a double fault. In Game 3, Puig double-faulted to give Pliskova a break point, but with a forehand winner, an ace up the T and another unreturned serve, Puig went up 3-0 and could see the finish line.

That is where the tide turned. Pliskova got on the board by holding for 3-1, and Puig made a handful of mistakes on her next service game, reducing her lead to 3-2. Pliskova then relied on her serve for free points as she won a long service game to tie the set at 3 piece.

Then Puig imploded. She missed an easy forehand and an easy backhand before double-faulting, challenging and losing to give Pliskova a 4-3 lead with the ball in hand.

Pliskova finished the match as the player everyone was expecting to see, bossing Puig around with her serve and forehand to take the final set 6-4.

In Round 3, Pliskova will play 29th seed Irina-Camelia Begu.