Jack Sock to face Jared Donaldson in Miami Round 4 - UBITENNIS 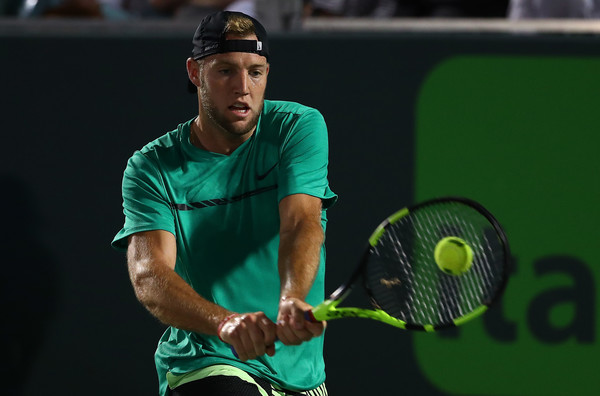 Sock has reached the quarterfinals or better in the last three Masters 1000 events, and he has a solid chance extending that streak to four, as his round-of-16 opponent will be the world No. 95, #NextGenATP’s Jared Donaldson.

Donaldson advanced to the fourth round on a walkover after Milos Raonic, the tournament’s No. 3 seed, withdrew due to the hamstring injury he has been battling for a while. Sock won the Delray Beach final in February on a walkover when Raonic withdrew with the same injury.

Semis at IW for Jack Sock, and now he plays Jared Donaldson for the right to reach the Miami QF. Trap match or golden opportunity?

Sock, should he reach the quarterfinals, would likely play Rafael Nadal, who has to get through Nicolas Mahut first.

Sock went down 30-40 in the first game of the match, but he salvaged it with a forehand winner, an ace up the T and another unreturned serve to hold.

Later in the set, Sock was up 3-2 and had three break points after Vesely missed an overhead. Vesely saved the first one with an overhead winner, but he lost the second by missing a forehand volley long. Sock consolidated with an ace out wide for 5-2.

Vesely fought off two set points on his serve in the next game, but then Sock got the ball back and held to win the set 6-3.

The first half of the second set was relatively bland, save this ‘tweener pass from Vesely:

Jirí Veselý goes between his legs for a winner: https://t.co/ThutYkiYqs pic.twitter.com/ZWChqpCHAf

At 3-3, Sock had (and lost) two break points. He also lost his last remaining challenge. Vesely held for a 4-3, on-serve lead.

Vesely then broke for a 5-3 lead when Sock netted a forehand pass attempt. This gave Vesely the opportunity to serve for the match.

Vesely, after a double fault and a missed forehand, gave Sock two break-back points. Sock converted the first when Vesely missed a backhand overhead wide, reducing the lefty’s lead to 5-4 on serve.

The players exchanged holds to 6-6, sending the set into a tiebreak.

In the first point, Vesely lost his serve with a backhand into the net. Vesely later went down 0-5, losing his serve twice more with another missed backhand and a double fault. Sock, with a forehand winner and a backhand volley winner, took the tiebreak 7-0 to end the match.

Perhaps the most memorable moment of Vesely’s tournament — other than the ‘tweener — took place during his first-round victory over Tommy Haas.