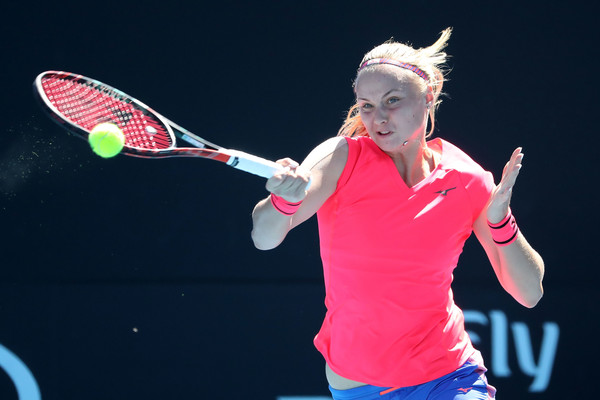 Both teams were forced to deal with decimated teams- Slovakia without Cibulkova and Italy without Vinci, Giorgi or Knapp. The tie was played on indoor clay in Forli, Italy. 36 year-old legend Francesca Schiavone opened the tie against World No. 252 Anna Schmiedlova. The 2010 French Open winner took the match 6-3 6-1, and got Italy off to a good start. Following it was a clash between Sara Errani and Fed Cup debutant Rebecca Sramkova. Errani seemed to have it under control, winning the first set 6-2, but once Sramkova’s hard hitting Giorgi-like game started to work, there was no coming back. The Slovak No. 2 turned the match around to win 2-6 6-3 6-4 in her Fed Cup debut. Day 2 was started by Sara Errani facing Daniela Hantuchova. Errani struggled with movement and is most likely injured, leading to Hantuchova winning 6-2 6-0, and Errani finishing the match in tears. Sramkova then had a chance to win the tie for Slovakia and send them into World Group play-offs and she took it. Her high risks brought high rewards against Schiavone, whose contrasting styles made for a great match to watch. Sramkova kept her cool in the important moments, and won 6-2 6-4. The dead doubles rubber had Paolini and Trevisan, young Italian talents play Schmiedlova and Sramkova, who retired from the match at 2-5. Sramkova had the best possible debut for her country, winning 2 out of 3 points that Slovakia won, against higher ranked and much more experienced players.

Russia’s F-team played Taipei’s B-team in Moscow. Russia’s team featuring Ekaterina Makarova, Anna Blinkova, Natalia Vikhlyantseva, and Anna Kalinskaya faced Chinese Taipei without Su-Wei Hsieh and Yung-Jan Chan. Makarova opened the tie with a shaky 6-3 5-7 6-1 win over Ya-Hsuan Lee, only for Kai-Chen Chang to equal with a 6-3 7-5 win over Kai-Chen Chang. Makarova then took care of business against Chang, and Natalia Vikhlyantseva was brought in to finish the tie against Lee. The Russian did so in an impressive manner, winning 6-1 6-2 in just 58 minutes. Blinkova and Kalinskaya won the dead rubber over Chan and Hsu 6-3 7-5. If Russia can mobilize and get a better team together for the play-offs, they can be almost assured that they will have a place in the World Group again.

Even without the injured Simona Halep, Romania were still the favorites with the home advantage. Niculescu and Flipkens began the tie, both players with quite unusual playing styles. The faster indoor hard court suited the Belgian better, and Flipkens got the first point for her nation, winning 6-3 6-4. Sorana Cirstea played the second match of the day against Yanina Wickmayer, who won the marathon 3 hour and 22 minute match 7-6(4) 5-7 7-5, sending Belgium to a 2-0 lead. For Day 2, both captains changed their original line-ups. Irina-Camelia Begu played for Romania, and Elise Mertens was to close out the tie out. Begu was up 6-3 5-4, but Mertens just edged her out, closed out the tie with an almost 3 hour match, 3-6 7-5 7-5. Dead doubles rubber was won by Romania, who fielded Sorana Cirstea and Monica Niculescu, winning 6-2 6-0 over Kirsten Flipkens and Maryna Zanevska.

A Stosur-less Australian team was outed by Ukraine. Team led by Gavrilova failed to win any of the singles matches, and they could be relegated to the Asia/Oceania regional group for the first time in Fed Cup history, since 1963. Gavrilova really let her team down, as she lost easily to first Tsurenko, then to Svitolina. Ash Barty pushed Svitolina to three sets, but it was not enough. Ukraine move on to the World Group Play-Offs, and with an opponent like Netherlands, they can definitely be in World Group in 2018. Barty and Dellacqua got the doubles point for Australia, winning 6-2 2-6 10-8 over Nadia Kichenok and Olga Savchuk.