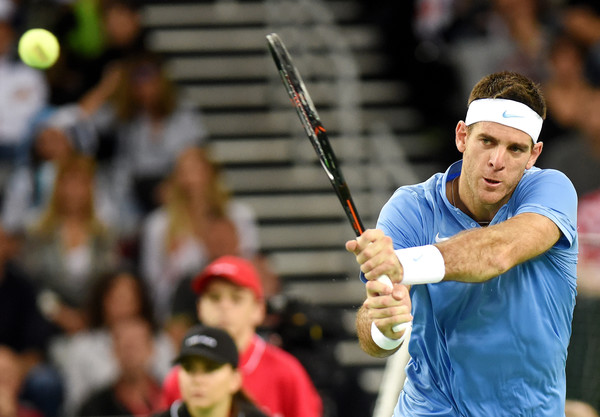 Juan Martín del Potro’s 2016 return to tennis was among the most captivating stories of the past year.

After undergoing surgery on his (non-dominant) left wrist in June 2015, del Potro mounted his 2016 comeback in Delray Beach, where he lost in the semifinals to the eventual champion, American Sam Querrey. Of course, del Potro went on to take the silver medal at the Rio Olympics and lead Argentina to their first Davis Cup victory.

Del Potro then, to rehabilitate his wrist, took a couple months away from the tour, missing the 2017 Australian Open.

Now, just like last year, del Potro is back at Delray Beach. He won his first-round match 6-4, 6-4 over former top-10 player Kevin Anderson.

It's getting to be a tradition: Delpo comes to Delray and wins his 1st match of the season, over Kevin Anderson, 64 64 https://t.co/Yy6ZLdVN7w

The gentle giant got into some trouble in his first service game after back-to-back missed forehands gave Anderson a break point. Del Potro saved himself, though, with an unreturned serve and an ace up the T to tie the opening set 1-1.

Fast forward, and at 2-2, Anderson missed a backhand overhead into the net, giving del Potro ad out. Del Potro then lost the break point when he fell over in the process of stopping and starting, allowing Anderson to sneak out the hold with the help of his big serve.

In the next game, del Potro showed a flash of his peak performance abilities by hitting a rocket crosscourt forehand winner. He won the game to make it 3-3.

Anderson started the following game on the wrong foot and missed forehand volley wide. Del Potro then hit a forehand volley winner to take a 0-30 lead. The Argentine next hit a forehand return winner off Anderson’s second serve, opening up three break points. Anderson took all three of them, bringing the score to deuce via an ace out wide.

Anderson then missed a forehand long, giving del Potro another break point. That’s where it got weird. Anderson seemingly double-faulted, but he challenged the line call on his second serve and won. That gave him another first serve. But on the do-over point, Anderson missed a short inside-out forehand, letting del Potro break to go up 4-3.

The three games that followed were holds, and del Potro came away with the set 6-4.

In Set 2, del Potro earned his first break point by forcing an error on a backhand pass attempt. Anderson then netted a backhand of his own, putting del Potro up 2-1 with a break.

Del Potro — by using his signature looping forehand to crack winners, and not letting his physically compromised backhand be too much of a weakness — never gave Anderson a chance to get back in the set. The 6’6″ 28-year-old held on to close it out 6-4.

Del Potro beats Anderson, a battle between two former champs in Delray. And Delpo made it look very easy in his first match back.