Davis Cup: Australia completes the Czech dismissal with an imperative win in the doubles - UBITENNIS 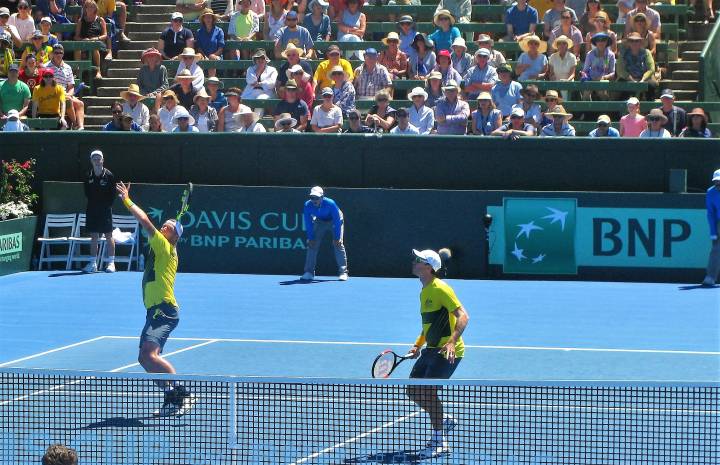 Sam Groth smashing the match away, observed by his mate John Peers

Australia closes the Czech file with another peremptory win for 3 sets to 0 in the doubles, with a score of 6-3 6-2 6-2, and moves to the quarterfinals where they will most probably meet the United States (up 2-0 against Switzerland). The Aussie pair Groth-Peers displayed determination and teamwork to close the match quickly, while the Czechs – who had a last minute team change, with Vesely and Satral taking to court due to Stepanek’s injury – appeared listless, committing many unforced errors and showing to be a sort of a botched pair.

A summer Saturday in Melbourne today with a temperature over 30C, and summer heat. The stands at Kooyong Lawn Tennis Club are reasonably crowded and colorful; in Australia, when you go to support your team, you show your colours, that’s a must. Here we go then, with  ladies in their 70s wearing green and gold jerseys, and their husbands with Australian flags on their sun hats. Then there are the Fanatics, the historical group of tennis fans, this time with a marching band, too. 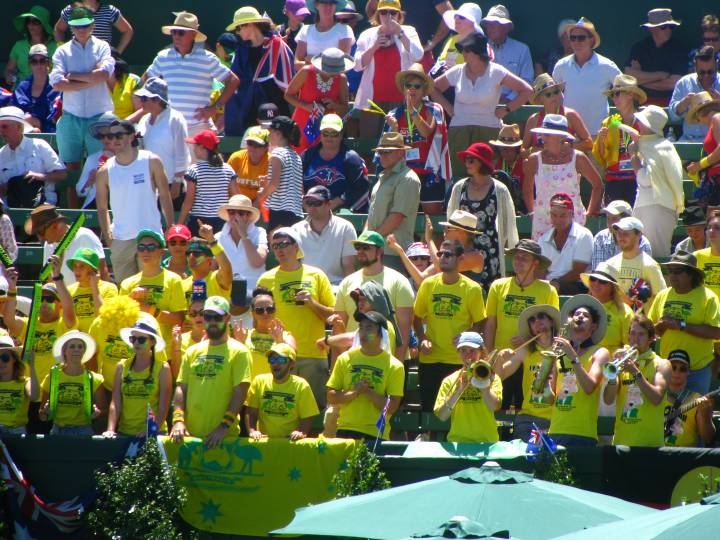 Some heat strokes, lots of applause and a few yawns, because of the little resistance offered by the Czechs. The most exciting moment was undoubtedly the Powerade shower by Groth and Peers to captain LLeyton Hewitt  during the after-match interview on the court.

These celebrations might go on a while (and someone will probably need to organise some dry cleaning…) #GoAussies #AUSCZE pic.twitter.com/5E7tWF0WsM

So what about the rubber? Not too much to say because the match lasted 6 games, with Australia breaking Satral to move up 3-1, but then losing serve with Peers, a little tense or maybe with his head still at the Grand Slam victory a week ago at Melbourne Park. Anyway, here comes another break to Satral and then Peers decides to play, gets 4 first serves in and closes the first set 6-3. Groth is simply majestic, not only when serving (ace at 237 km/h) but especially when returning both with the forehand and backhand, blocking, driving, lobbing and taking the Czechs by surprise. In the second set Vesely’s serve is broken in the opening game and then again at the fifth game, while Satral manages to miss an overhead and frames the volley on next shot. At 5-2 it’s Groth’ turn to close the set, with a love game with 2 aces. The two Australians communicate a lot between points and during the game, both covering well the net and always putting the Czechs under pressure, who instead have continuous misunderstandings and seem not to know what to do on court. “It ‘s the first time we played together” Vesely said at the press conference “but is not that with Stepanek would be different, they were simply too good.” Satral and Vesely go to the locker room before the third set and most probably leave the residual grit there: over the next 4 games they are able to collect one 15 only. 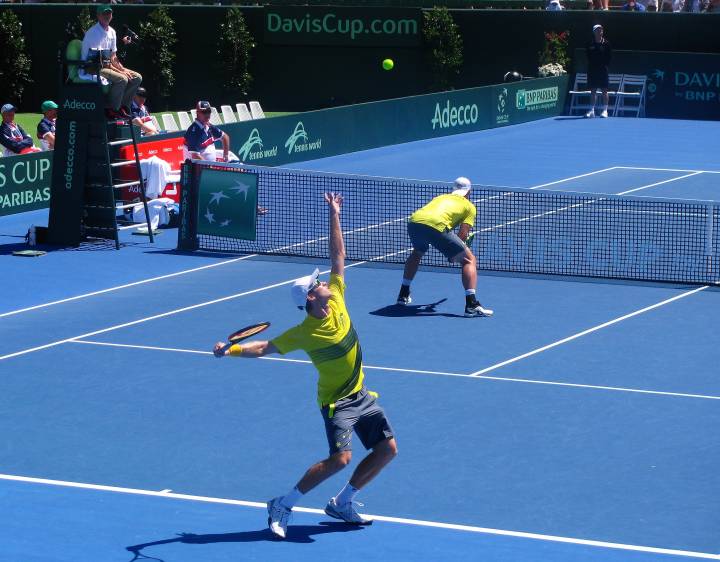 In the fifth game Vesely saves 4 break points to avoid a humiliating bagel. Groth clinches the victory a few minutes later with an ace in an hour and a half. “The boys came out and did all the hard preparation and it’s nice to know that all the hard work paid off,” says Hewitt at the press conference, while also acknowledging the whole team, including sparring partners DeMinaur and Smith. “It’s been a fantastic team effort and I couldn’t be prouder of these guys.”