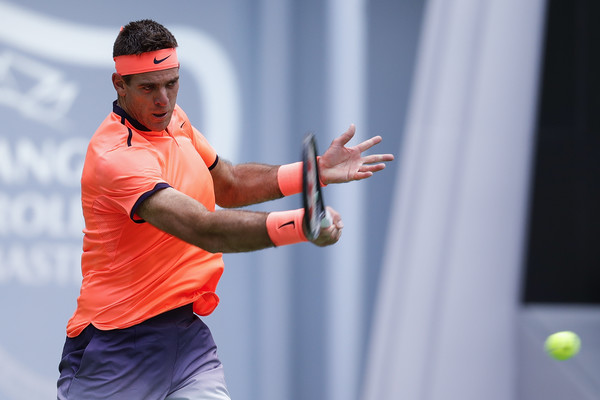 Dzumhur started the match off with an unlucky break of serve, hitting the tape twice. Del Potro was solid on serve, but Dzumhur didn’t give up and stuck with it. The Bosnian broke back to 4-4, and had a set point at 5-4. Then he managed to fend off a break point and the first set headed to a tiebreak. Del Potro controlled the tiebreak, and won it 7-5. Del Potro went up 3-1 in the second set, outplaying Dzumhur and it seemed like it was over, but in an incredible second set comeback, World No. 79 took the second set 6-4 with incredible defence, making Del Potro play the extra ball and expose his backhand. Dzumhur was playing a very physical game, and started to run out of steam. Del Potro didn’t take any risks with his serve, and won the final set 6-3.

“It was a really tough match for me, he [Dzumhur] was really fast from the baseline and I couldn’t put away winners from my forehand, but I remained positive all the time. I got my chances in the end of the match and I took them, I played my best game in the final set,” said Del Potro about the match.

“He played very smart, kept hitting the ball to my backhand, played slices, but in the end I was more offensive from the baseline and I came to the net in important moments and that made the difference. I didn’t expect this battle, I didn’t know him but I think he is so good and can play even better on clay courts. He will be an interesting guy to watch too,” said Del Potro about Dzumhur.”

Del Potro’s next opponent is 4th seed and defending champion Sam Querrey, who defeated a fellow American and doubles partner for this week, Jared Donaldson 6-2 6-3.

This is what the Argentine had to say about this match-up: “It’s going to be a completely different match tomorrow. He plays and serves as strong as me and he plays really fast from the baseline. I think he is the favorite to win, because he beat me here last year and has a better ranking. I will see what I can do against him tomorrow.”

Donald Young through to semifinals

In the second round, Young was faced with a fellow American Taylor Fritz. After taking a medical time out for his left knee and dropping the first set, the 27 year-old came back to win 4-6 6-3 6-4.

“My knees were bothering me, it happens when I jump or put pressure on it. Some days are better than others, but today it happened to really bother me in the match. The Ibuprofen kicked in, and I felt a lot better,” said Young about his medical timeout.

“I’m an emotional player. When I’m feeling good, I’m playing well. When I’m not, it’s really showing on the court. It’s something I have been trying to even out and it’s a constant battle,” commented Young on his game.

Donald Young has gotten lucky and will have more recovery time, as his quarterfinal opponent, Belgian qualifier Steve Darcis withdrew from the tournament due to personal reasons and had to return to Belgium.