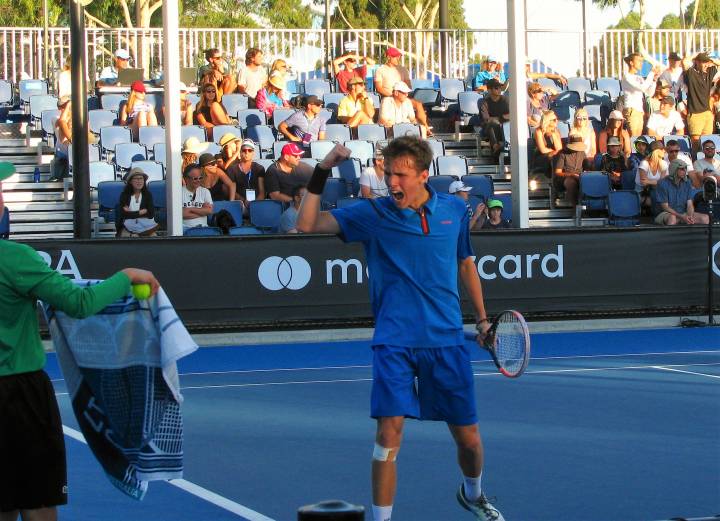 We did not see a new Kyrgios (winner in 2013) nor a Zverev (winner in 2014) this afternoon at Melbourne Park, but what a high quality thriller match between 16 years old Piros from Hungary and Israeli Yshai Oliel! Thanks boys for one of the best finals of the last years.

It’s 6:08PM at court 7, with the sun still high and the temperature rather hot, when the match starts between Oliel (seed n.4) a lefty who defeated top seed Wu in the semifinal, and Piros (n.15) who defeated seed n.2 Hsu in R3. The Israeli crowd is big and loud (“Yalla Yshai“), sometimes too loud booing the Oliel’s opponent for no reason, waving their flags. There’s also a colourful group of Hungarian supporters to give that extra thrill to the match.

Piros starts well and takes a 2-0 lead displaying from the beginning a very intelligent tennis, for someone who is 20 cm shorter than the opponent and definitely not as strong. He alternates kick serves on the first ball to flat ones, and does the same with his forehand, changing the pace often, sometimes hitting rather morbid ball, and then accelerating especially when hitting inside-out.

After the momentary shock Oliel takes control playing deep and moving the opponent, breaking him immediately back and a second time at the seventh game, then controlling to claim the first set 6-4.

Piros managed to regroup and kept displaying a good range of shots, including a very soft touch at the net and legs like springs. Thanks to an unforced error by Oliel the Hungarian takes a 3-1 lead, which then capitalises up to 5-3 and serve, but loses the serve poorly with a improbable drop shot and a backhand passing shot along the line going out wide. It’s Oliel’s opportunity to level up and then close the match. Instead, a series of unforced errors give Piros 2 set points. The first one is enough to take the match to the decider: 6-4

It’s a nerves game now, the crowd roaring louder and louder, the chair umpire often reminding not to clap in between first and second serve. The rallies are getting longer and longer, 24, 28 shots.  Oliel is unable to control the game and displaying his bigger power, Piros runs like crazy and hits bak every shot. At 3-2 Piros, Oliel is serving yet another deuce game. He wins a super-long rally, but then places an easy overhead in the net. That is a crucial moment, an unforgivable error which the Israeli will pay very dearly. With a forehand winner Piros gets a break point which then converts. It’s 4-2 which becomes 5-2 shortly after. Even if in pain (muscle problem at the right forehand) Piros maintains his focus and takes advantage of the unforced error of Oliel who has lost confidence watching the match slipping through his hands, and takes home the final set 6-4. 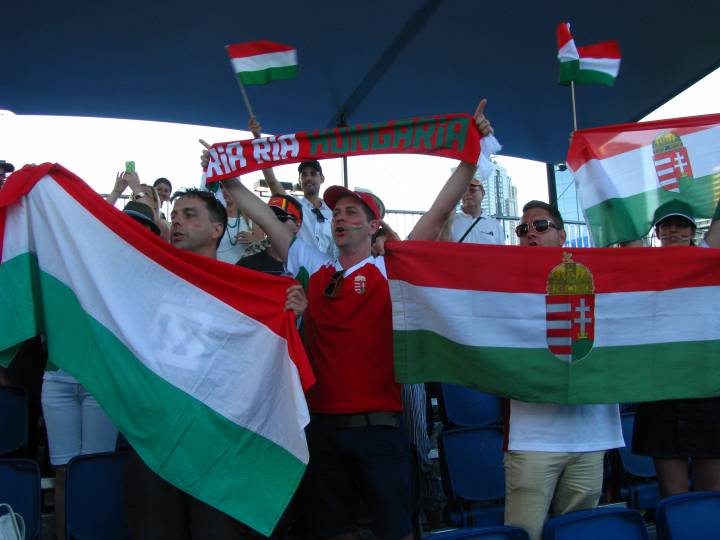 At the ceremony, the young Israeli in tears is unable to speak. The Hungarian – in receiving the up from Craig Tiley -realises he has achieved the best result of his young career, having his name on the same cup with Edberg, Roddick, Kyrgios and Zverev to name a few.