Karolina Pliskova: "Jelena Ostapenko was tight and shaky at the end. I was a little bit lucky" - UBITENNIS 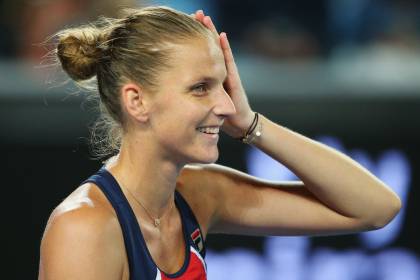 Karolina Pliskova fought back from one set down to edge 2014 Wimbledon Junior champion Jelena Ostapenko 4-6 6-0 10-8 after two hours and five minutes.

Ostapenko looked to be close to reaching her first fourth round when she took a 5-2 lead in the third set and served for the match twice but dropped her serve both times. Pliskova got the crucial break in the 18th game to clinch a dramatic win after surviving a big scare.

“I was just trying to put every ball in because she was playing so hard and so aggressive. She was a little tight. I felt it. It was a very hard match and I think I was a little lucky in the end. She was playing very well, maybe the better player. But I am excited to be here in the fourth round for the first time in my life. When she was 5-2 up, and she was missing a little more. She got a little bit tight and shaky. She actually said it to me now in the locker room, that she was tight. I was staying in the game, even though I broke my racquet, but I was still fighting. I also deserved to win. Until 5-all, I served just one game well. Otherwise, I was just trying to put the balls back in, waiting if she is going to get tired and she got. It was about me. She was playing really fast, really well. She deserved to win, but unlucky in the end for her”, said Pliskova.

“Even if it was not my game, it was not an easy match, I manged to take the win. The only thing what I am pleased with was my serve in the third set. I think I had high percentage of the first set actually”.

Pliskova has reached the third round at the Australian Open for the first time in her career.

“I am happy. It’s the first time I am actually in the third round here. It doesn’t matter how I played, how I won, what happened there. I am through. That’s the most important thing for me. I am just going to try to improve. I had some easy matches now in the past, even in Brisbane. I had just one tough match against Roberta Vinci. I think I needed a hard one”

Pliskova set up a fourth round match against Australian Daria Gavrilova.

“I am excited to take on an Australian player. I just got to know that I am playing against Dasha. We played once. We are going to play again on a big court, which is a good thing. I am used to to having the crowd against me, so nothing is going to surprise me. I am going to have the chance to play my aggressive game, not like today”.

Andy Murray: “I am disappointed, but Zverev deserved to win”