Andy Murray avenges his brother, moves on to fourth round - UBITENNIS 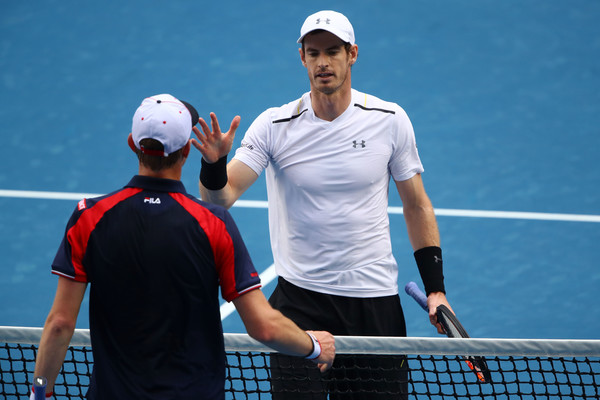 Uber driver "hey, you look like @andy_murray."
Me – "yeh I get that a lot"
Uber Driver – "you're much better looking mind you." Cheers Mate!

Murray, whose fitness was subject to significant speculation after he had rolled his right ankle in his previous match, triumphed with a straightforward scoreline of 6-4, 6-2, 6-4.

“I felt better and better as the match went on. In terms of my movement, I was a little bit hesitant maybe in the beginning. It was a little bit sore, but I was moving well at the end, so that was very positive,” Murray said post-match in his on-court interview.

Net points were a big factor in this match, with Murray making 27 trips to the net, and succeeding on 23 of them.

The first set was tight until the end. There were no breaks of serve until Querrey’s marathon service game at 4-4, which went to deuce four times only for Murray to break the American via a forehand lob winner.

Murray then consolidated easily to take the set 6-4.

In the second set, Murray jumped ahead early, thanks to the four consecutive unforced errors committed by Querrey that gave him a 2-1 lead.

A few games later, with the help of a lucky let cord, Murray broke again for 5-2, and proceeded to win the set 6-2.

Murray’s momentum carried over into the third set, as he broke Querrey in the opening game on an easy forehand pass. Querrey later broke back, though, tying the set at two after Murray missed a backhand wide. Querrey then made the match interesting by holding for a 3-2 lead.

But it was all for naught because Murray struck again by breaking for 5-4 and then serving superbly to close it out at 6-4.

“It was obviously a tough match,” Murray said after his latest win, “especially in the first set, key moment at 3-4 when I managed to break, and I had the momentum after that. I felt better and better as I went, little bit sore, but I was moving well at the end, which is a positive. The place was packed from the first ball and we love that as players.”

Now that Murray is into the fourth round and Novak Djokovic now out, this is perhaps the Brit’s best chance to win his first Australian Open title.

Murray will play world No. 50 Misha Zverev in the round of 16. Zverev defeated Tunisia’s Malek Jaziri in four sets earlier in the day.

Stan Wawrinka Overcomes Blip To Down Troicki At Australian Open