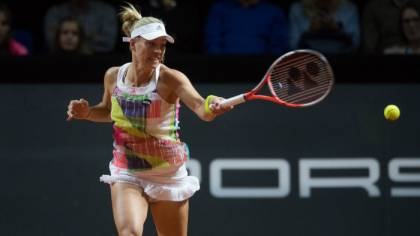 Three two-time Grand Slam champions Svetlana Kuznetsova (defending champion), Petra Kvitova (2015 winner in Sydney) and Angelique Kerber (world number 1 and winner at the Australian Open and at the US Open in 2016) will highlight the Apia International in Sydney

Angelique Kerber will lead a star-studded line-up, which features defending champion Svetlana Kuznetsova, who used the triumph in Sydney as a springboard to a highly-successful season, in which she won the Kremlin Cup title in Moscow to book a last-minute berth for the WTA Finals in Singapore. Kuznetsova, who won the US Open in 2004 and Roland Garros 2009, beat future Rio Olympic champion Monica Puig in this year’s Sydney final. The Russian player was outside the top 20 at the start of the season but a series of good results enabled her return to the top 10.

Kvitova, twice winner at Wimbledon in 2011 and 2014, was unable to defend her 2015 Sydney title due to illness but will make her return in 2017 as a strong contender. Kvitova enjoyed a successful second half of the season in which she won the Olympic singles bronze medal in Rio de Janeiro, the WTA Premier tournament in Wuhan (after beating four top-10 players) and the WTA Elite Trophy in Zhuhai.

“Sydney is one of my favourite tournaments and I can’t wait to come back next year. Unfortunately I was not able to defend the title this year due to illness, so I am excited to get back out onto Ken Roswell Arena where I had so much success”, said Kvitova.

The Sydney tournament will be held the week before the Australian Open starting from 8th January.

“We are thrilled to once again welcome the world’s best female tennis players to Sydney in January. The women’s event has consistently been one of the most competitive on the WTA Tour and that is reflected in the calibre of athletes that choose to play our event. We are incredibly proud to be leading the way when it comes to celebrating and supporting women’s sport, with our financial commitment for the WTA event in 2017 topping $ 1 million for the second straght year”, said Sydney Tournament Director Alaistar McDonald.