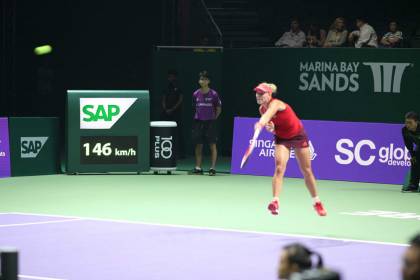 World Number 1 player Angelique Kerber will start her 2017 season at the WTA Premier in Brisbane. Serena and Venus Williams have opted to open their 2017 campaign at the WTA International in Auckland.

“Brisbane fans are in for a thrilling week of entertainment with the confirmation of our best field yet signing on for 2017”, said Brisbane International Tournament Director Geoff Quinlan.

Serena and Venus Williams will kick off their season at the ASB Classic in Auckland in New Zealand against a very competitive field, which features defending champion Sloane Stephens, 2015 Auckland runner-up Caroline Wozniacki, 2015 Roland Garros Lucie Safarova and former world number 1 and 2014 Auckland champion Ana Ivanovic. Serena Williams will play at an International Tournament for the first time since Bastad 2015, where she withdrew after just one match. Her sister Venus beat Wozniacki to lift the Auckland Trophy in 2015. Stephens started her 2016 season on a high note winning in the Auckland final over Julia Goerges after beating Wozniacki in the semifinals.

Agnieszka Radwanska will defend her title at the Shenzhen Open, which features 2014 champion Simona Halep, Johanna Konta, the first British player to reach the top-10 since 1983 and Timea Bacsinszky. Last January Radwanska did not drop a single set in the whole week and beat Alison Riske in the final.

Petra Kvitova, this year’s WTA Elite Trophy champion in Zhuhai, and Belinda Bencic will open their season at the Hopman Cup. Bencic will team up with Roger Federer, who will make his eagerly-awaited come-back after being sidelined from injury since the Wimbledon semifinal last July.