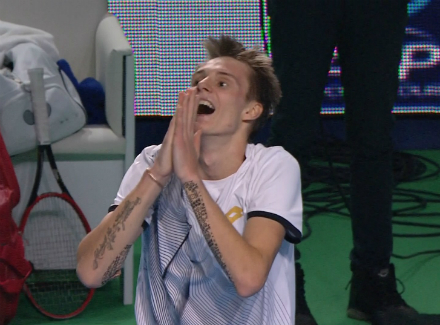 Within a week Alexander Bublik has gone from being an outsider to one of the main attractions at the Moscow Open following his shock second round win over top seed Roberto Bautista Agut.

Facing a player ranked over 250 places higher than him on Thursday evening, Bublik displayed tennis that exceeded his current position of 266th as he dismissed the Spaniard 6-2, 7-5. Throughout the encounter the 19-year-old capitalized on his powerful serve, which consistently reached the 200km/h mark. Furthermore, the Russian produced 22 winners compared to Agut’s dismal tally of five.

“I still don’t believe what I just did. It’s incredible. I played great tennis,” said Bublik, according to atpworldtour.com. “I had nothing to lose against him. It was my first time out on such a big stage against a top player, so I went out aggressively and tried to enjoy it.”

Bublik’s Moscow breakthrough is the latest achievement in what has been a standout year for the rising star. Ranked 964th in January, he has managed to climb 700 places in the rankings after producing a win-loss record of 39-16 before Moscow. On the futures tour the teenager has won four titles this season (two in Russia, one in Qatar and one in Sweden). Furthermore, on the Challenger circuit, he has managed to grab wins over former top 100 players Teymuraz Gabashvili and Radu Albot.

When I asked Bublik did he feel any difference in speed playing RBA compare to his lower level opponents, he said “Yes, he played slower”.

The surge in Bublik’s performance on the tour comes just 18 months after he achieved a ranking high of 19th on the junior circuit in March 2015. Now a permanent fixture on the professional tour, the promising Russian is bidding to play in his first professional grand slam tournament in January at the Australian Open.

“This success will allow me to play in the qualifying Australian Open – I will go up in the ranking somewhere in the region of 230th position. So it is possible to book tickets to Melbourne.” He told Russian media shortly after his first round win against compatriot Konstantin Kravchuk.

Following up on his first round win by stunning the top seed Bautista Agut, Bublik is now projected to exceed the 230-mark and be ranked inside the top 210 for the first time in his career next week.

In Friday’s quarter-final, the 19-year-old will play sixth seed Pablo Carreno Busta in what will be a tough match. Carreno Busta won his first ATP title earlier this year at the Winston-Salem Open.