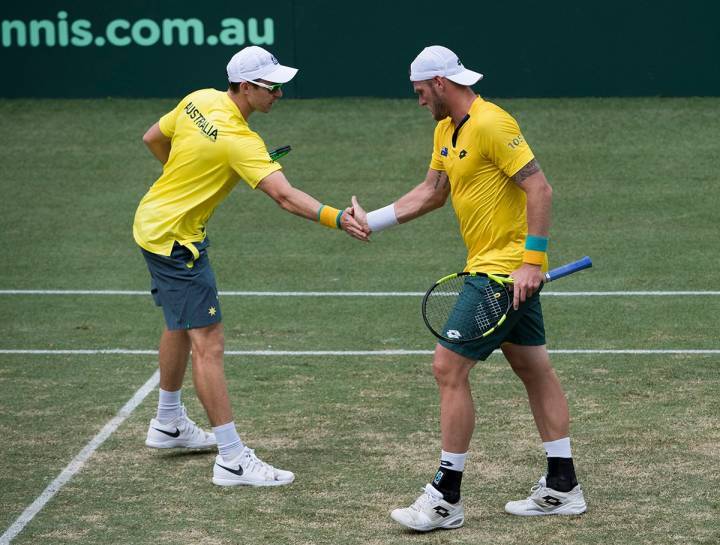 Australia closes the Slovakian file winning the doubles in four sets 6-4, 6-2, 6-7(3), 7-6(2), thus maintaining its  status in the World Group. Peers e Groth could not close the match in the third set lost momentum, but played then a perfect tie break to seal a 3-0 victory.

Another nice and sunny day in Sydney, where the grass – or what’s left of it – of the Ken Rosewall Arena hosts the doubles match, which in Davis Cup could be the decider or a totally irrelevant match: given the easy victories of  Kyrgios and Tomic in day one, we are definitely in the second scenario.

It’s 1 PM when the match starts, with Slovakian Andrej Martin and Igor Zelenay (both ranked around 80th position in ATP doubles) desperately trying to keep the tie alive. Australia starts at a good pace, with Groth serving often at 220 km/h, with top speed of 233 and returning really well, especially with the backhand along the line from deuce side. Peers is a doubles specialist, n.26 of doubles ranking, tactically very savvy, serving precisely and with a soft touch and great reflexes at the net. Out of the four, Martin has by far the weakest serve, lacking fluidity and power, the first serve travelling at 17 km/h. He has to face two consecutive break points straight away, but holds. Australia holds serve to love a few times (both Groth and Peers will lose 3 points on their serve in 5 rounds), but cannot convert break points (0/4) until 5-4. With Zelenay on serve, Peers first plays a great point at the net, then hits a winner backhand return. Also Groth returns a 200 km/h serve with a backhand winner and Australia is up 0-40 with 3 consecutive set points. At the third attempt Peers and Groth take the first set 6-4 and are in control.

It takes 24 minutes only to the Aussies to take the second set, breaking Zelenay on 2-1 and then on 5-2 when the Slovakian hits two consecutive double faults. It looks like the Aussies are cruising, and in control. “They played well, but we were the one creating all the opportunities” said Groth in the press conference. It was actually a great game by the Australian pair, serving well (Groth looking for the bomb, Peers alternating kick, slice and topspin and acing on second serve at 149 km/h) returning well, taking the net, displaying both power and soft touch.

Then something happen. Slovakia changes their position on return “I went to the deuce side and Andrej on the ad side and we did a better job”, says Igor Zelaney at the press conference. The Aussies cannot put the foot down, the Slovakians start reading Groth’s serve and so the Aussies are taken to the tie-break, despite having a match point at 6-5, which Martin saves with a good serve. The tie-break is played superbly by the Slovakian, especially by Martin: a stop volley gives them 4 consecutive set points. The first one is saved by Groth’s serve, but then Zelaney seals the set: 7-6(3) and the match is re-opened.

As the sky changes and becomes cloudy, so does the momentum of match. The Australians now have to work more to hold serve, whereas the Slovakian win a number of love games on theirs. Groth’s return is not effective anymore and he looks a little bit slow on his feet especially at the net. The Australian are behind in the score, even if not broken, and kept afloat by John Peers, to me the best on court, (both when defending  from the baseline and at the net), to reach the tie-break.

As it often happens in tennis, here comes another momentum swing. First Martin put an easy forehand volley wide, then Groth finds focus and return, Peers keeps on returning well and Australia is up 5-0 and then 6-1. “The first point was really unlucky then Groth hit a great serve and then we had a misunderstanding, a little bit of bad luck again” comments Martin. Slovakia saves the first match point, then another great return by Groth gives Peers the opportunity to poach in and seal the victory with a backhand volley.

“[Staying in the World Group] was a goal after the loss to US in march [..] we put a lot of work into this ties, you know, the boys came to prepare early and did all the right things. Having a grass court here in Sydney as well, which I thing played to our hands.[…] we did absolutely everything to reach this outcome.” says captain LLeyton Hewitt. “Today the boys put in a really solid performance. They did not drop serve, did not face a break point in the match”

The final day will probably see one rubber only played  at best of 3 tiebreak sets. Possibly Groth against Gombos, in what can be called an exhibition game.