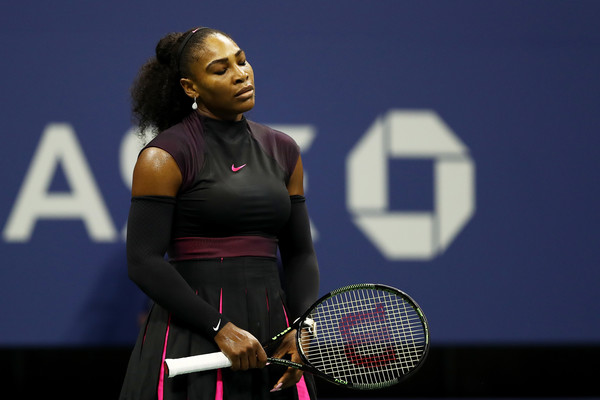 Pliskova was entirely dominating the opening set. Her first break came for 2-1, had a break point for 4-1, but she got her second break at 5-2 and easily served out the set. Pliskova herself didn’t face a single break point, and was simply better in every aspect of the game. The Czech was great on serve with 4 aces and 86% of points won after 1st serve. She was also punishing Serena’s second serve, losing only 2 of those points. Williams’ ratio of winners to unforced errors was off too, only 5 winners to 11 errors.

Second set was where things broke, where Serena showed her fighter mentality. After saving the break point in the opening game, Serena steadied her service games more, and became more aggressive on Pliskova’s second serve. The Czech thought she could run away with her break for 3-2, but after failing to capitalize on her opportunity and not putting more of the first serves in, Williams broke right back to 3-3. Serena demonstrated her mental prowess and didn’t let Pliskova hackle her on her serve. Pliskova also, as always, was almost emotionless on the court. Even when serving to stay in the set at 4-5, she served it out to 5-5 effortlessly. After 2 more holds of serve, the match went into a second set tiebreak.

With a 3-0 lead to start it off, Pliskova looked like she might run away with the tiebreak, as she did in her match against Venus. Serena, with the crowd behind her back takes it back to 2-3. Pliskova double faults, and the players change sides, equal at 3-3. After an incredible rally, Williams takes the lead and the momentum from Pliskova, only to double fault on the next point. Serena doesn’t let her opponent break and keeps a lead of 5-4. Pliskova serves, makes it 5-5, and here comes the most important point. Whoever wins the point, will have the match point. Pliskova wins the long rally, and shouts, channeling all her emotions of the match in that one shout. Serena now serves. She serves to stay in the match, in the tournament, to stay the World No. 1. She sends both serves long, and the Arthur Ashe Stadium sighs in defeat, as Pliskova raises her hands up to the sky, victorious.

Throughout the match, Serena seemed to be struggling with movement, and that accentuated in the tiebreak. Later, in the press, the American admitted to having left knee issues since the second round. That was after being agitated by the repetitive questions about being tired or fatigued. Serena also refused to talk about her schedule for the fall, Kerber becoming No. 1, and the No. 1 ranking as a whole.

“I don’t think much really went well today. I made a lot of errors and I didn’t play as well as I have been playing.”said Williams after her match “When you’re hampered you’re thinking of other things. Like I was making errors that I never make, and definitely I didn’t make in this tournament in particular. So many simple, simple shots that I easily could have made.

“I would say also the game was quite similar to Venus, so I knew it’s gonna be a little bit about the same match what I played with Venus and same serving, same speed. So obviously Serena is No. 1. Venus is a little bit behind her. She’s definitely playing a little bit better. I was expecting tough match but I knew I can win.” said Pliskova after her best career win.