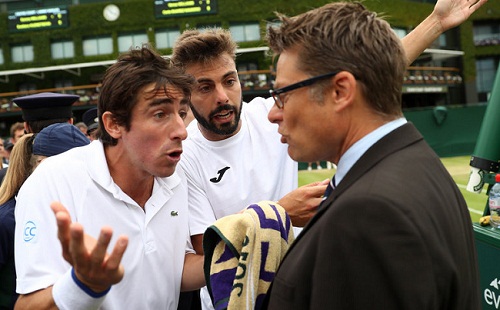 In a bizarre controversy at Wimbledon, Pablo Cuevas threatened to urinate courtside after being denied a bathroom break during a men’s doubles encounter on Monday.

Uruguayan Cuevas, who was playing alongside Spain’s Marcel Granollers in the third round match against the British-Canadian combination of Jonathan Marray and Adil Shamasdin, requested umpire Aurelie Tourte for a bathroom break at 8-9 in the fifth set.

Cuevas, however, was denied a call of nature as he had already taken two breaks earlier in the match. The rules state that a player cannot go off to the lavatory more than twice.

According to The Guardian, an onlooker subsequently spotted Cuevas peeing into a can under the cover of towel during a changeover. However, the claims were later rubbished off by tournament officials.

The hullabaloo continued at 12-13 in the decider when Cuevas smashed a ball into the stands, only to be handed a code violation. In objection, the duo organized a sit-down protest before resuming the play shortly thereafter.

Cuevas and Granollers couldn’t save them the blushes as they lost 14-12 in the fifth set.