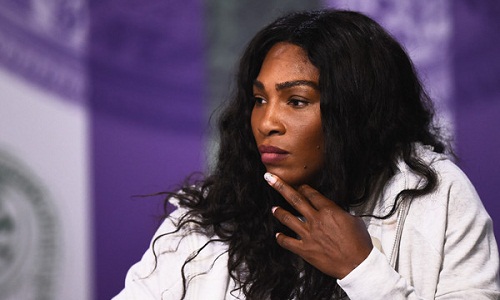 Serena Williams threatened to sue Wimbledon after she tripped during her fourth round match against Svetlana Kuznetsova on Monday.

The match began with the roof uncovered on Centre Court as there were no signs of rain initially. However, the officials didn’t feel the urge to have the roof on even as it started to drizzle as the game progressed.

Serving to save a break point at 4-4 in the first set, the top-ranked American lost her balance on the slippery grass as she conceded the break to her Russian opponent.

Infuriated by this, Williams rushed towards the chair umpire, complaining about the roof being unclosed despite light rain affecting the grass.

“I’m going to fall. I don’t get it. Can’t they just close the roof? If I get hurt, I’m suing,” howled a fuming Williams, as quoted by Yahoo Sports.

The 34-year-old, eventually, went on to cruise for a 7-5 6-0 triumph, but later expressed regret on the comments she made in the “heat of the moment”.

“What I say on the court – whether it’s smashing my rackets – it’s in the heat of the moment,” she continued. “I have no plans, no future of suing Wimbledon. Let’s get serious. That’s not what I do.”

VIDEO: A Review Of The Wimbledon Men’s Final By Ubaldo Scanagatta and Steve Flink

The Wimbledon Report: An assessment Of The Women’s Fourth Round Matches