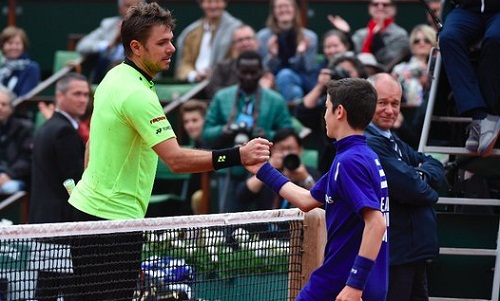 Stanislas Wawrinka is not known much for his celebrations. The Swiss tennis star keeps his emotions in check more often than not. However, it wasn’t the case at the French Open on Sunday as he found a way to please the crowd during his fourth-round match against Serbia’s Viktor Troicki.

It happened so when the match was interrupted for a while with Troicki needing a medical time-out, when a “bored” Wawrinka approached a ball boy, asking him if he could hit some shots with him. The ball boy, unsurprisingly, took up the racquet and started to return a few back to the Swiss star.

Kid’s got game! To avoid getting cold during Troicki’s medical TO, Wawrinka recruits ballkid to help him stay loose. https://t.co/KgUAZVOwg0

“I was a little bit bored. I was talking to the ball kid. I asked him if he played tennis. I said, okay, let’s play,” the defending champion told, when asked about it in the post-match press conference.

It was the end of amusement for the spectators. As soon as Wawrinka completed a 7-6, 6-7, 6-3, 6-2 victory to advance to the quarter-finals, he waved the crowd to for a Snapchat video.

Moving on, the fourth-ranked Wawrinka is scheduled to lock horns with Spain’s Albert Ramos-Vinolas for a place in the last-four stage.

The World Of Tennis Pays Tribute To Flavia Pennetta