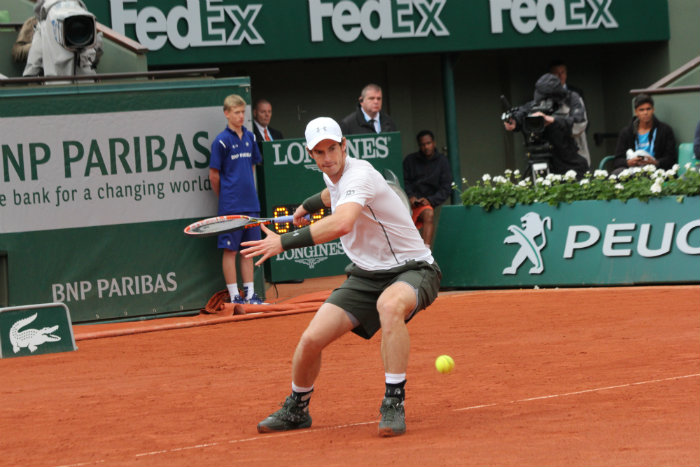 Andy Murray lost eight consective games to drop the second and the third set but fought back to battle past French wildcard Mathias Bourgue 6-2 2-6 4-6 6-2 6-3 on the Phillippe Chatrier after three hours and 34 minutes in another five-set match to advance to the French Open third round. Murray had to fight back from two sets down for the ninth time in his career to overcome Radek Stepanek in five sets in the first round.

Bourgue earned three break points but Murray bounced back to hold his serve. The 22-year-old Frenchman sealed the third set with a backhand winner.

Murray won a long rally with a drop shot and held his service game for 1-0 in the fifth set. In the second game Bourgue got it back to deuce with an overhead lob and took the advantage. The French player held serve with a drop shot. At 40-30 in the third game Murray held his serve with an error from Bourgue. Murray broke serve in the fourth game of the fifth set for 3-1 taking advantage of errors from the Frenchman.

In the fifth game Murray raced out to a 40-0 lead. Bourgue clawed his way back to 30-40 but Murray held his serve as Bourgue hit into the net. Murray got a double break at deuce in the sixth game for 5-1. Murray went down 15-30 on his service game and hit into the net after a long rally to face two break points at 15-40 as he was serving for the match. Bourgue broke back on his second chance. Murray earned a match point at 5-3 40-30  and sealed the win after three hours and 34 minutes as Bourgue hit his return into the net.

Before today Bourgue played just one Grand Slam match in the first round of this year’s Roland Garros on Monday.

“Mathias was excellent amd made me run a lot. He has got a fantastic future for sure. I led 6-2 2-0 then he started playing unbelievably and I was finding it hard to win points, let alone games. I have played matches like this before and tried to fight through to the end because opponents can hit a rough patch. You can’t too many matches like this if you want to go far in this tournament. I hope to win the next one a little bit faster