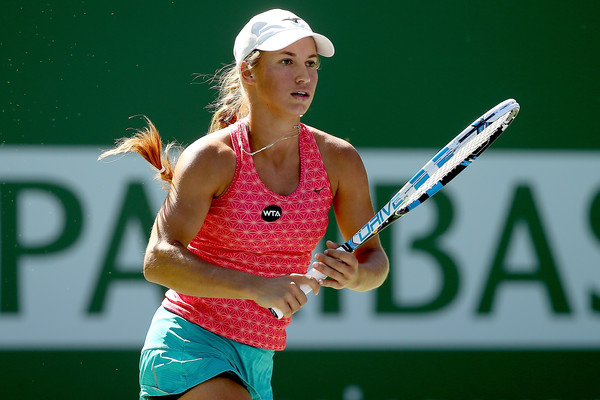 Yulia Putintseva pulled off the upset of the day over Venus Williams, bouncing back from losing to the 34 year old just earlier this year in Kaohsiung. After an incredible 3 hour lasting drama, Putintseva won 7-6(5) 2-6 6-4. Yulia Putintseva will face the fifth seed Sara Errani in the quarterfinals.

“She played really well, you know, and I think sometimes it just comes down to luck,” said the American. “You just don’t get any luck. And there’s no easy matches, and I tried to continue to play aggressive, but just wasn’t in the cards today.”

Angelique Kerber is still in the play, as she defeated the Slovak qualifier with a double-handed forehand, Kristina Kucova. The scoreline was a bit deceptive, because despite it being 6-2 6-3, Kerber struggled on serve in the beginning of the first set, and was even 0-2 down in the second set. Even though she didn’t seem especially comfortable, Kerber contradicted that in her comments after the match.

“When I walk in here, of course the people recognize me much more than last year,” the German observed. “But it feels good. I mean, I’m enjoying it, and the people are so nice here. I’m feeling like really I’m welcome at home, so it’s great.”

Sara Errani seems to be on good form, as she ousted the past champion at Charleston, Samantha Stosur. Errani edged the Australian in two close sets, 6-4 7-6(5). Errani’s next challenge will be Yulia Putintseva.

Sloane Stephens also advanced in straight sets, beating Daria Gavrilova, also an Australian, 6-4 6-3. Stephens is having the best result in Charleston in her career so far. Her next match is setting up to be a blockbuster match between two ‘Rising Stars’, between Stephens and Daria Kasatkina. The 18-years-old Russian made the quarterfinals by beating the wild card Louisa Chirico 6-0 6-4.

Elena Vesnina is the last qualifier standing in Charleston, not putting her foot of the gas pedal, losing only 6 games in her last two matches, one of them being against Belinda Bencic. Her last match against Dominguez Lino was an hour and 20 minutes and ended 6-1 6-3. Elena Vesnina’s upcoming opponent will be Laura Siegemund of Germany.