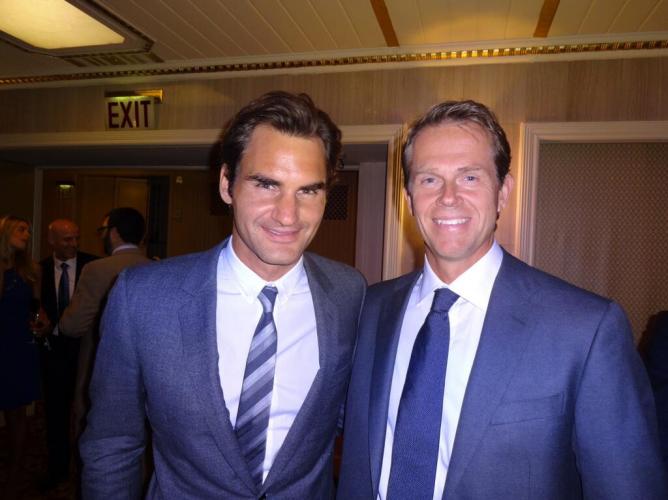 Stefan Edberg and Roger Federer ended their working relationship on good terms at the end of last year. After working together for 2 years with the Swiss and bringing him back to World No.2, Stefan decided to end his commitment to the 17-time Grand Slam champion in order to have more time to spend with his family in 2015. Recently speaking to a Swedish television channel, the 6-time Grand Slam champion praised once again his former protege, but this time speaking more in detail about Roger’s human side and personality.

”I can surely say that those two years spent working with Roger have been amazing. I wasn’t part of the tennis world for a while back then, before deciding to work with Federer. I was surprised to see how things have changed. Above all I was very impressed by Roger Federer as a man. Inside and outside a tennis court, I can confirm that he is truly the best possible ambassador this sport could have hoped for. He has passion and charisma. Roger has followed a great path in his career, and I am sure he is going to continue in doing so” affirmed Edberg.

Speaking of the actual state of tennis, Edberg put Roger Federer together with Rafael Nadal and Novak Djokovic as some of the best tennis players of all time.

”This generation, with Federer, Djokovic and Nadal, has conquered altogether more than 40 Slams in 10 years or so. We are in a golden era for tennis. These players took the game to a level never witnessed before; they have dominated for over a decade now. Something like this had never happened before, and it shows how unique this generation is”

Stefan also told an anecdote of when he met Federer for the first time.

‘‘I met him for the first time ever at the Stockholm Open in 2012. He told me I was a childhood idol for him. We had a very nice and pleasant conversation. We talked like we had known each other for ever, he was very spontaneous. When he asked me to work together I questioned myself trying to decide what I could have done to help him and his game. If any other player had asked me to collaborate I would have said no’‘ revealed Edberg.

After undertaking surgery for a knee injury he procured himself while bathing his sons, Roger Federer hasn’t played a tournament since falling in the semis of the Australian Open to Djokovic. The Swiss was supposed to comeback to tennis two weeks ago in Miami, but he caught a virus and the flu and had to pull out of the Florida Masters last minute.

Currently in Monte Carlo, Federer his preparing his clay court debut, which will be next week.

Ivan Ljubicic has replaced Stefan Edberg in Federer’s team, joining as co-coach with Severin Luthi at the start of 2016.

Roger Federer Inaugurates Another Street in His Name