Fed Cup: CoCo Vandeweghe replaces Keys and completes Australia's disposal by the USA who are back in World Group - UBITENNIS 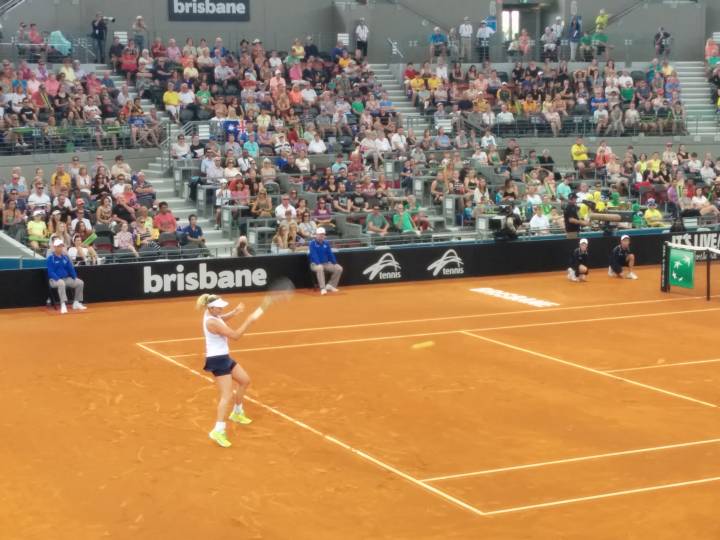 CoCo Vandeweghe: solid as a rock

After a disappointing Saturday, Australia was trailing two-love and had to show their best to try to level the tie to take it to the decider doubles. “It’s about regrouping and I think believing and trusting ourselves tomorrow” . These were the words by Alicia Molik at the after-match (pardon, rubber) press conference yesterday. For about one hour and a bit trust grew today, to then collapse under Vandeweghe’s strokes. It ended with Stosur in tears and USA back to the World Group.

The fourth singles was not played. In the doubles, Gavrilova/Rodionova lost to Vandeweghe/Mattek-Sands 1-6 4-6 to complete the Aussie debacle.

USA deserved the victory showing more determination, more aggressiveness and more resilience bouncing back twice from one set down. Keys played impressively well (watch out for the upcoming clay season), both McHale and Vandeweghe started slow but regrouped and did not miss a chance when it came up. Gavrilova was possibly a bit too nervous but was clearly out-powered by Keys whilst Stosur started both rubbers perfectly to then melting along the way in the tropical Brisbane heat.

CoCo Vandeweghe (USA) d. Sam Stosur (AUS) 2-6 7-5 6-4
Another beautiful tropical day in Brisbane and the Pat Rafter Arena is crowded and loud. Aussies love tennis and love supporting their team and showing their colours. It’s such a pleasure to see 70 years old ladies all dressed up in green and gold (including wigs) and so competent in the nuances of this beautiful game. 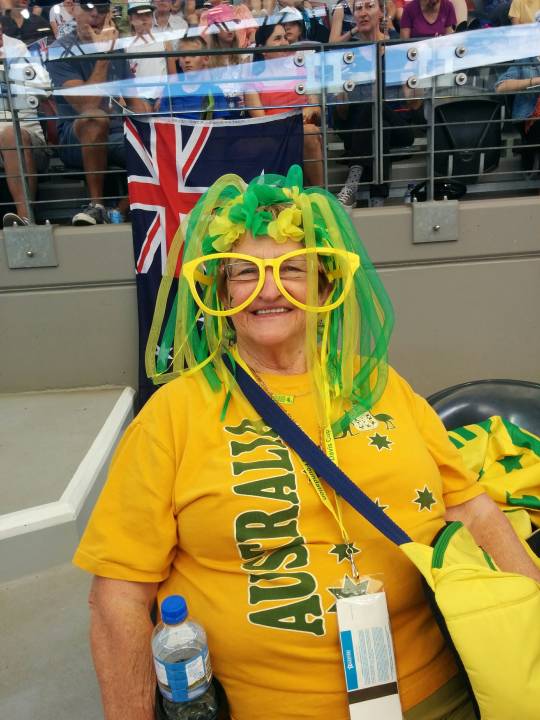 Aussie fans are always colourful, regardless of their age

The first rubber of the day starts with a surprise, as Coco Vandeweghe takes the court replacing Madison Keys (who is wearing sunglasses instead of the team’s uniform). Stosur starts so determined you would not believed 24 hours earlier she had badly choked. When the rally is longer than 4 shots Vandeweghe is winning it, but Stosur is serving (78% first serve at 170 km/h) and returning so well that seldom a rally is that long. Vandeweghe seems incapable of opposing and the Australian flies up 3-0, then 5-2 and set point: same situation as yesterday. This time she gets it taking advantage of the American sending Stosur’s return a couple of meter long: 6-2 Australia in less than half an hour.
Everybody is expecting Sam’s dip in focus, and guess what? She faces 3 consecutive break points in the first game, but today it’s a different Stosur who is able to regroup and hold serve. Even though Stosur keeps serving well (75% first serve) Vandeweghe has finally adjusted to her serve and returns very effectively. Her serve also grows (4 aces and 78% points won on first serve) with a sliced serve to the forehand and flat to the backhand of Stosur, and the match becomes tight. Let’s face it, it’s not a great match, but the tension keeps the spectators glued to their seats, exploding in chants to support the Australian. “I want to thank the Aussie crowd for cheering against me so hard it was really something special” says a cheeky Coco in the after match interview. At 5-5, yesterday’s Stosur reappears on the court: she makes and then breaks the game, with a double fault, a couple of great winners to lead 40-30 and then unforced errors to lose serve. Vandeweghe thanks for the gift and with a couple of aces takes the set 7-5.

Stosur is now suffering against the American and loses serve straight away and Vanderweghe consolidates. “I was in control in the first but losing set 2 was huge. A match like that can come down to a couple of points” says the Australian at the press conference. Even if the Aussie keeps to love her next three service games, the momentum is on the American side and Vanderweghe even ventures in a serve and volley, with forehand half volley brushing the net and dropping in Stosur serve box. Without much excitement the match goes to 5-4 with Vandeweghe serving for the rubber and the tie. The game is dramatic with the chair umpire Carlos Ramos correcting a double fault (no hawk eye on clay and by the way it was out) and giving Vanderweghe the possibility of replay point. Then on 30 all the American double faults (a total of 6 for her today) rising Australian hopes. Stosur faces the opportunity by sending long an overhead from the service line. She has a second chance this time frustrated by Vanderweghe’s forhand winner (18 winners today for her, 12 for Stusur). A cross court backhand then forces Stosur to the error giving USA the match point and tie point: Vandeweghe’s serve stops on Stosur’s racquet and USA is back to the World Group, leaving the crowd extremely disappointed and Stosur in tears. “It’s disappointing and frustrating but it’s better to go down in a tight one. It does not make it any easier right now, but on the whole I was playing a good tennis” she says at the press conference.

Czechs Reach Another Fed Cup Final After Drama In Lucerne.