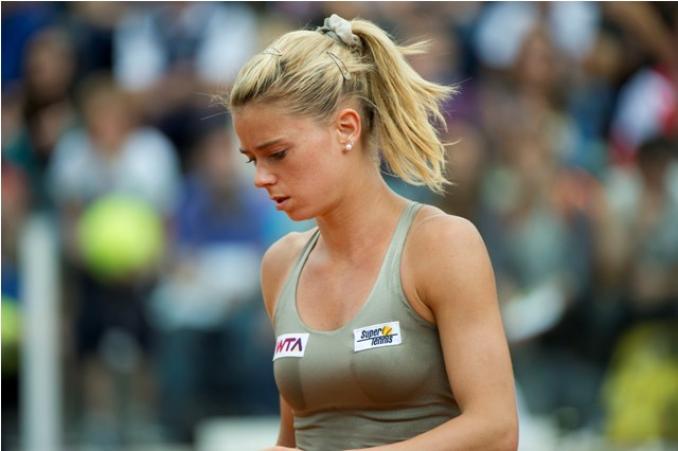 Camila Giorgi edged past Kirsten Flipkens 6-2 5-7 6-4 in two hours and nine minutes in the Katowice WTA International Tournament to reach the semifinals where she will face 18-year-old Jelena Ostapenko. Giorgi will be bidding to reach her third consecutive final in the Polish indoor tournament.

Giorgi got the first break in the fifth game of the opening set, as Flipkens made two consecutive double faults. The Italian player got the double break to take a 5-2 lead before closing out the first set on the next game in 29 minutes.

Giorgi went up a set and a break in the third game of the second set with her forehand return to take a 2-1 lead. Flipkens broke straight back in the fourth game as Giorgi made an unforced error. In a trade of three consecutive breaks Giorgi broke in the fifth game to take a 3-2 lead with a crosscourt backhand return. She held her serve to love for 4-2. Flipkens broke back in the eighth game with a smash. Flipkens saved a break point chance in the 11th game before breaking serve in the 12th game to close out the second set as Giorgi made three unforced errors.

Giorgi got an early break at the start of the third set. The third set went on serve until the seventh game when Giorgi failed to convert four break points as she made two unforced errors. In the eighth game Flipkens broke back to draw level to 4-4 as Giorgi made an unforced error and a smash error. Giorgi broke again in the ninth game and served for the match in the 10th game. Flipkens went up 15-40 on Giorgi’s serve. The Italian saved the two break points she faced before closing out the match. Giorgi finished runner-up to Alizé Cornet in 2014 and to Anna Karolina Schmiedlova in 2015.

Giorgi will face Jelena Ostapenko, who overcame Timea Babos 7-6 (7-3) 2-6 6-3. Both players traded breaks in the opening set which came down to the tie-break where Ostapenko prevailed by 7-3 after Babos made four backhand errors. After trading breaks in the first four games of the second set, Babos won four consecutive games to force the match to the third set.

Dominika Cibulkova beat 2010 Roland Garros champion Francesca Schiavone 7-5 6-1 in one hour and 15 minutes. Cibulkova won all her previous three matches against Schiavone. The Italian enjoyed a solid week in Katowice in which she beat Alizé Cornet in straight sets on Thursday.

Cibulkova converted all her three three break points to reach her third semifinal in 2016.

Cibulkova will face Pauline Parmentier who beat Magda Linette 6-2 6-4 to improve her record in their head-to-head matches to 3-0.