The Tennis World Mourns the Passing of Bud Collins - UBITENNIS 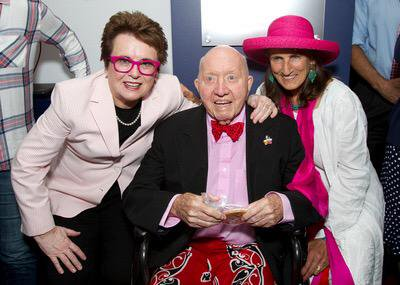 Bud Collins has left us all yesterday, at 86, surrendering his battle to the sickness that had kept him far from his best for too long, bending his body but not his enthusiasm for life. Our director Ubaldo Scanagatta, who has worked alongside Bud in the most important and renowned press conferences of the major tennis tournaments in the world, decided to take on our website to leave a special message to his friend.

“Bud has been a giant in his profession and he never bragged about it. He has never been presumptuous or arrogant, not for one second. I wish I had more time to write more about him, also to share anecdotes many can’t even think of. For now I only think about him, my friend Bud, with wet eyes. We will not forget about him. No one more than Bud Collins has been important, appreciated in the United States within his sport. He was an incredible writer, a walking encyclopedia and a ”hall of famer” of the most valued and respected.”

The entire tennis community took on social media to mourn the loss of such a legend. Here are some of the tweets dedicated to Bud on his passing day:

Integrity, passion, intelligence,wit,compassion…. Friend… I, like many, will miss you terribly…RIP Bud Collins

Few people have had the historical significance, lasting impact and the unqualified love for tennis as Bud Collins. pic.twitter.com/CLuJF2ThVm

RIP Bud such a passionate guy about our sport of tennis,he will be truly missed hope they hav big matches upstairs https://t.co/OoXAq3wDMT

RIP Bud Collins- Dear Bud- you proved you can be a great human, a great humanitarian & a world class reporter at the same time- much love…

Bud Collins with @TennisChannel gang during 2013 Wimbledon. We will miss you Bud. pic.twitter.com/dOOsvCXUhi

Dear Sir Bud Collins! You sure left a very fun and colorful print on our sport! Thank you for that. RIP pic.twitter.com/9eTIeWMpTv

Heartbroken at passing of @budcollins. Tennis lost a legend. His knowledge, wit, humor & humanity will be missed. pic.twitter.com/q30yk6DjtY