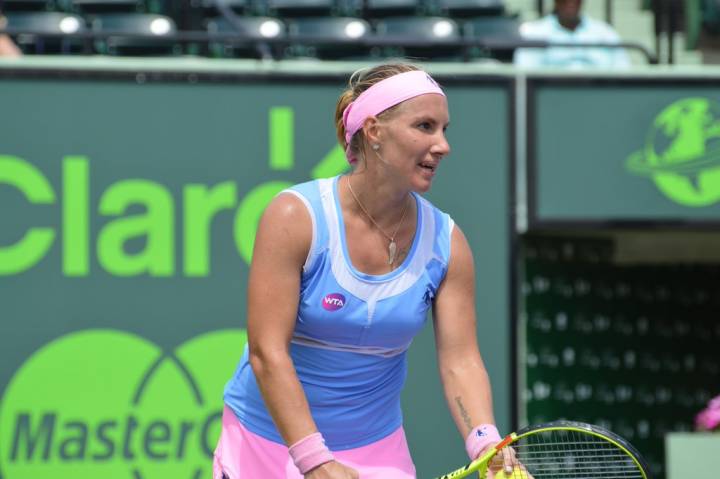 Svetlana Kuznetsova fought back from a set down to stun Serena Williams 6-7 (3-7) 6-1 6-2 in the fourth round at the Miami Open on a hot and humid day. Kuznetsova broke Williams’ 18 match winning streak in Miami to reach the quarter finals at Key Biscayne for the first time since 2009.

After winning the first set at the tie-break, Williams won just three games in the next two sets to suffer the earliest exit from the Miami tournament since 2009. The last World Number 1 player Kuznetsova managed to defeat was Dinara Safina at the 2009 French Open.

Serena Williams’ 20 match winning streak at the Miami Open came to an end against Svetlana Kuznetsova in the fourth round in Miami. Serena has suffered her earliest exit in Miami since 2000 when she was defeated by Jennifer Capriati in the round of 16. Williams had reached the quarter finals or better in 14 of her 15 previous appearnces in this tournament.

Williams held her serve at deuce in the opening game of the first set. She earned a break point with a backhand lob inside the baseline and broke serve to take a 2-0 lead as Kuznetsova netted a forehand. In the fifth game Kuznetsova broke back for 2-3 with a backhand pass down the line. In the seventh game Williams broke serve when Kuznetsova hit a mid-court forehand into the net on the third break point. Kuznetsova saved two break points to hold serve for 4-4. Kuznetsova hit her first ace to hold her serve forcing the first set to the tie-break. Williams hit a forehand return winner down the line to clinch the tie-break by 7-3 after a 56-minute first set.

Kuznetsova put pressure on Williams at the start of the second set but Williams saved three break points at 1-1. The Russian player broke serve in the fourth game to take a 3-1 lead.

Kuznetsova got a double break to pull away to 5-1 as Serena made a double fault en route to winning the second set by 6-1 in 35 minutes.

Kuznetsova broke serve to love at the start of the decider to win her sixth consecutive game. The Russian player won 12 points to 2 to open up a 3-0 lead. Williams broke serve at 1-3 to stop a losing streak of eight consecutive games. As she served for the match, Kuznetsova hit an ace and never looked back to clinch the win on the second match point.

Kuznetsova finished the match with 27 winners to 13 unforced errors to 50 for Williams, who made 9 double faults.

Kuznetsova will face either Elina Svitolina or Ekarterina Makarova in the quarter final.

“I am really thrilled. I am sorry fans who are disappointed that Serena is not going to keep playing, but for sure she will be at more events than here. I am really happy with my performance. I tried to stay at good level the whole game, put as many balls back. I think I did that pretty well and I am happy with the way I served today”, said Kuznetsova.

The Russian star, who won the Miami title in 2006, has improved her win-loss record against Williams to 3-8 and has beaten her US rival for the first time since the 2009 French Open quarter finals.

“I am too old. I won my previous Miami title 10 years ago. I have been on this court many times. I love playing on this stage. The fans in Miami are great. I love being back here and I am really happy with my performance”, said Kuznetsova.