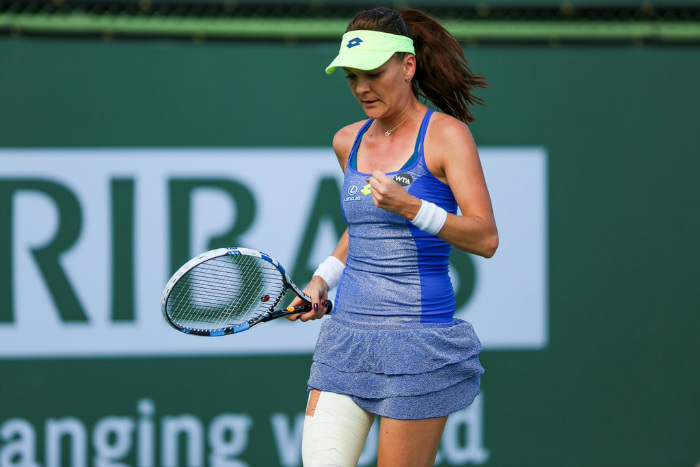 Agnieszka Radwanska beat Petra Kvitova 6-2 7-6 (7-3) in the re-match of the 2015 WTA Finals title match in Singapore to reach the semifinals at the BNP Paribas Premier Mandatory Tournament in Indian Wells.

Radwanska and Kvitova met for the 10th time in their careers. Kvitova led 6-3 in their previous head-to-head matches but Radwanska beat her Czech rival to clinch the WTA Finals title last year in Singapore.

Radwanska saved a match point in the first round against Dominika Cibulkova, while Kvitova reached the quarter finals after winning all her matches in the third round.

Kvitova held her serve in the first game but Radwanska broke serve in the third game for 2-1 as Kvitova made a double fault and three forehand errors. Kvitova failed to convert four break back points in the next game. Radwanska got a double break in the fifth game to pull away to 4-1 as Kvitova made three double faults. The Pole won five consecutive games to race to a 5-1 lead.

Kvitova saved her service game for 2-5 but Radwanska served for the first set in the next game. The Polish star closed out the first set on her first opportunity.

Radwanska broke back for the second time in the 9th game to claw her way into the set for 4-5 with a spectacular drop-shot. As Radwanska served to stay in the set, she won her third consecutive game to draw level to 5-5.

The second set came down to the tie-break. Radwanska cruised to a 4-0 lead with a double mini-break. Kvitova recovered one of the two mini-breaks but Radwanska earned four match points at 6-2. The Pole converted her second chance as Kvitova hit her return into the net.

“I have good experience in the first match, almost losing 5-3 in the third. So I was pretty calm. Obviously that’s just one break, so you just keep going and I was a little big lucky in the end”, said Radwanska.

Radwanska will face either Serena Williams or Simona Halep in the semifinals.