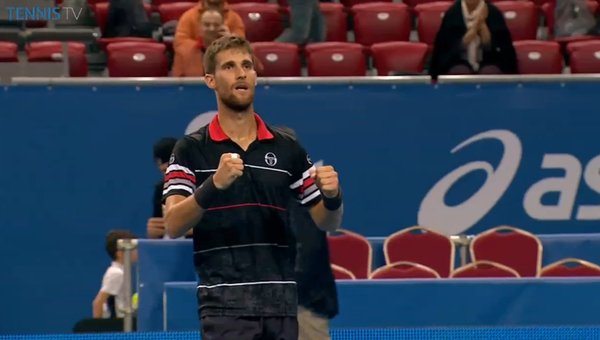 Martin Klizan rallied from a set down to edge past Gael Monfils 6-7 (1-7) 6-3 6-1 clinching his first ATP 500 title at the 43rd edition of the ABN AMRO World Tennis Tournament in Rotterdam. Klizan improves his win-loss record in finals to 4-0.

The first set went on serve without breaks and came down to the tie-break after Monfils had to save six break points, while Klizan fended off three break points. Klizan played a tie-break for the fifth time this week (her win-loss record in the five breakers is 2-2). Monfils dominated the tie-break with 7-1 to take a one-set lead.

In the third game of the second set Klizan saved two break points at 1-1. The second set also went on serve with no breaks in the first seven games. As Klizan was leading 4-3, Monfils made a double fault on the break point allowing the Slovakian player to get the first break of serve in the 8th game. At 5-3 Klizan served out to seal the second set forcing the match to the decider.

Monfils faced three break points in the first game of the third set. The Slovakian got his second consecutive break to go up 1-0. Klizan won his first service game of the decider to love.

Klizan was on fire and converted his first double break point opportunity in the third game to race out to 3-0. Klizan carried the momentum and held his service game easily to cruise to 4-0 before earning three more break points.

Monfils attempted to avoid the bagel and earned two break points at 15-40 in the sixth game. Monfils took the only break of serve of the final to get a game on the scoreboard for 1-5 stopping a losing streak of eight consecutive games from 3-3 in the second set but in the next game Klizan broke again with a forehand winner

It was a well-deserved win for Klizan who had to save five match points in the quarter finals and three more match points in the semifinal before coming back from a set down in the final. He lived up to his reputation as the King of Comebacks after a magic week in which he won three matches in the third set.

Monfils has not won a title since Montpellier 2014 when he beat Richard Gasquet  He has a win-loss record of 5-18 in his 23 finals at ATP level.

“I will never forget this moment. I thank Gael. He is a good friend. I wish him all the best. This is the best result in my career. I am  very proud of it. In my country I am a motivation for the young players”, said Klizan

Mahut and Pospisil converted their fifth break point chance in the 9th game of the second set before serving out for the match. In the semifinal Mahut and Pospisil fended off one match point against Henri Kontinen and John Peers.

The French and Canadian team played for the second time together after being knocked out in Rotterdam last year.

Mahut lifted his 11th doubles title and his second win in Rotterdam where he triumphed together with Michael Llodra in 2014. Last year Mahut teamed up with Pierre Hugues Herbert to win the US Open doubles title.

“It’s my second ATP 500 title and my second time here, so I think it’s a great tournament for me. I am really proud of the week and I am really happy to share it with Vasek. He is a really good guy. We were a little bit disappointed last year to lose in the first round. This year we tried again and we are really happy to hold the trophy”, said Mahut