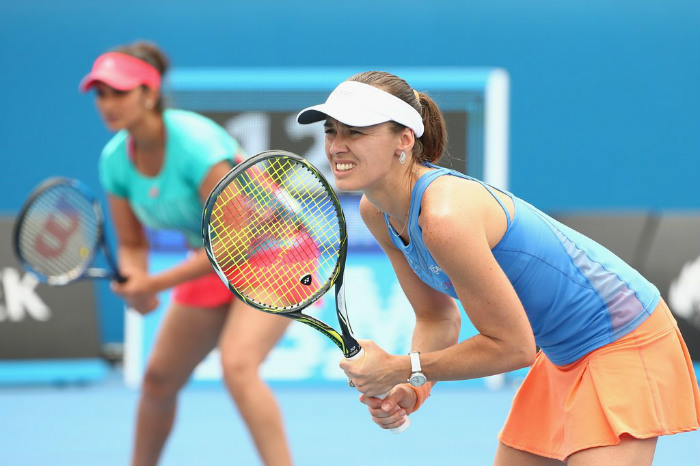 Martina Hingis and Sania Mirza have extended their unbeaten streak to 35 consecutive wins to reach the doubles final at the Australian Open. The doubles number 1 seed team beat Karolina Pliskova and Julia Georges 6-1 6-0 in a 54-minute semifinal.

Hingis and Mirza will be bidding to add another title to their impressive collection of titles which includes Wimbledon, the US Open, Guangzhou and Wuhan and the WTA Finals in Singapore won in 2015. They were last defeated by Hao-Ching Chan and Jung-Jan Chan in August 2015 in the Cincinnati semifinal.

In the Australian Open final Hingis and Mirza will face Andrea Hlavackova and Lucie Hradecka who came back from a set down to beat Yi-Fan Xu and Saisai Zheng 3-6 6-3 6-1. Hlavackova and Hradecka won two Grand Slam doubles titles at the 2012 French Open and at the 2013 US Open.

Hingis and Mirza beat Hradecka and Hlavackova 6-3 6-4 in their only previous head-to-head match in the round-robin at last year’s WTA Finals in Singapore.

Related Topics:Martina Hingis and Sania Mirza
Up Next