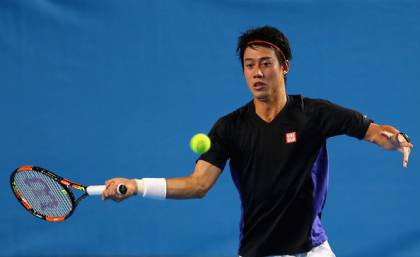 Seventh seed Kei Nishikori beat Phillip Kohlschreiber in straight sets 6-4 6-3 6-3 to reach the second round on day one of the Australian Open at Melbourne Park.

Nishikikori faced little resistance from the German player and broke serve four times without facing any break points. The seventh-seeded player from Japan, who reached the quarter finals in Melbourne in 2012 and 2015, hit 35 winners and converted four of his eight break point chances.

Nishikori broke serve once in the 10th game of the opening set to clinch the first set 6-4. The Japanese star got a break in the fourth game to take the second set. He never looked back in the third set and closed out the match in one hour and 55 minutes to set up a second round match against Austin Kraijcek who cruised past Chinese qualifier Wu Di 6-4 6-1 6-3 to clinch his second match win at Grand Slam level. Kraijcek hit 29 winners including 13 aces and broke serve six times.

Nishikori had to recover from a set down in the quarter finals in Memphis in 2015 in his only previous head-to-head match against Kraijcek.

“It was hot today but luckily I got finished quickly. It’s very dry here so actually I didn’t sweat much. It wasn’t too bad”, said Nishikori.

“It’s great to play against Kraijcek because we trained together when we were are really young, like when we were juniors. So it’s good to see him at this stage. We played together in Memphis last year. It was a tough match. He is a very aggressive player and has a good serve, comes to the net a lot. It is not going to be an easy one”, commented Nishikori on his next match.

Federico Delbonis pulled off the first upset of the first round when he beat “Ace King” Ivo Karlovic who withdrew from the match after trailing 7-6 (7-4) 6-4 2-1 due to a left knee injury. Karlovic fired 21 aces but Delbonis broke serve in the second set after winning the first set 7-4 at the tie-break.

Tomas Berdych, who reached the semifinals in the last two editions of the Australian Open, struggled in the first set against Yuki Bhambri but he converted six of his eight break points to win in straight sets with 7-5 6-1 6-2. Bhambri broke serve once and played a good match in the first set but Berdych took control of the match dropping just three games in the second and the third set. Berdych hit 35 winners including 13 aces

David Goffin came back from a set down to overcome Sergiy Stakhovsky 3-6 6-3 6-4 6-4 in two hours and 36 minutes. Stakovsky hit 10 aces and converted five of his ten break points but made 47 unforced errors. Goffin broke serve seven times. The Belgian player set up a second round match against Damir Dzumhur who overcame a five-set battle against 20-year-old British rising star Kyle Edmund with 1-6 7-6 (7-4) 4-6 6-3 6-1 in a marathon match which lasted over three hours. Dzumhum reached the third round at Melbourne Park in 2014.