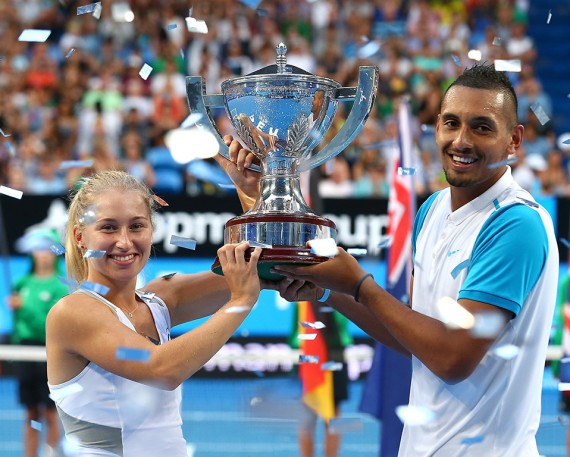 Nick Kyrgios and Daria Gavrilova ensured the Hopman Cup wouldn’t leave home soil for the first time in 17 years after defeating Ukraine in the final.

Gavrilova got the ball rolling for the Aussies with an impressive 6-4, 7-6 victory over Elina Svitolina. The young Australian had been trailing 6-1 in the second tiebreak and remarkably rallied back to close the set and put Australia Green 1-0 up.

“I played a tournament in under 12s, and it was a super tiebreaker, and I was down 9-1 and ended up winning”, unravelled Gavrilova afterwards with regards to where she drew her never-say-die attitude from. “I just literally told myself to settle down, just stop thinking of everything, just think about how to win every point”, she added.

The men’s singles rubber was a clash of styles between two as-of-yet undefeated players in the competition. The big serving and powerful hitting Nick Kyrgios against the tricky, unpredictable and talented Alexandr Dolgopolov. It was built up brilliantly but ended up being a no contest as the potency of the Australian ripped through the Ukrainian in just 57 minutes, posting a 6-3, 6-4 win that handed the locals the title. A title won by an exciting new generation that hopes to restore the success of years gone by to a tennis-mad nation.