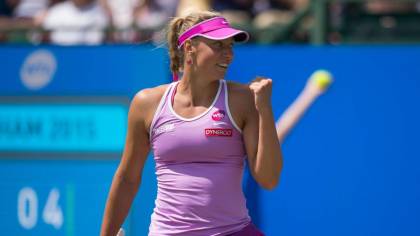 Yanina Wickmayer won the final WTA 2015 tournament besting Nicole Gibbs at the Carlsbad Classic, a 125K series event held at the Park Hyatt Aviara Resort. This is the first WTA tournament in the United States after the U.S. Open. Wickmayer, the top seed, took full advantage of her wildcard, not dropping a set in the entire event. The Belgian beat Gibbs in straight sets in a match that lasted 1 hour 35 minutes: 6-3, 7-6. Wickmayer ended the season on a high note with her second title of the year; she also won at Tokyo in September. Gibbs, the fifth seed, is still seeking her first WTA level title.

Wickmayer jumped to a quick 5-0 lead in the first set in just over 16 minutes. The twenty-six year-old did not give up any points in her first three service games. Gibbs did save four breakpoints in her first service game, but Wickmayer prevailed. The Belgian broke Gibbs’ serve again easily in the fourth game. Gibbs found her form holding serve in the sixth game, got one break back in the seventh and held serve again in the eighth game, saving a Wickmayer set point, to make the final competitive. However, Wickmayer closed out the 33 minute set in the ninth game. The Belgian won 75% of her service points, compared to 50% for the twenty-two year-old American in the set.

Gibbs, who played college tennis for Stanford, continued her improved level of play to start the second set to go up 4-1. She did not face a breakpoint in in her first three service games. The American could not capitalize on two break opportunities in the sixth game, which would have given her a 5-1 lead. Wickmayer held that game and the quickly broke Gibbs’ serve at love in the seventh game to get back on serve. Each player held her serve for the remainder of the set to force a tiebreak, which Wickmayer won handily, 7-4 to earn the title.

Wickmayer is currently ranked 49 and Gibbs has a ranking of 122. Both players will move up in the rankings with their showing at Carlsbad.

Yanina Wickmayer and Nicole Gibbs Will Meet in Final at Carlsbad