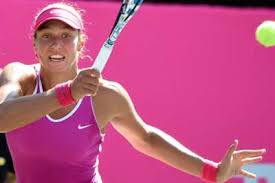 In the last WTA tournament of 2015, Yanina Wickmayer and Nicole Gibbs advanced to the final at the Carlsbad Classic, a 125K series event. The top seed Wickmayer of Belgium made the most of her wildcard beating Maria Sakkari of Greece in straight sets: 6-4, 6-2. Wickmayer who won the Tokyo title in September, is seeking her fifth career title. Gibbs, the fifth seed, defeated fellow American Jennifer Brady, also in straight sets: 6-0, 6-4. The twenty-two-old Gibbs is chasing her first WTA level title.

The Belgian got off to a shaky start dropping her serve in the third game, but was able to get the break back immediately. Indeed, the first set was marked by five breaks of serve. Wickmayer’s service points won were slightly higher than Sakkari’s (54% versus 47%, respectively). Wickmayer, currently ranked 49, improved her level of play in the second set. She did not face a break of serve and capitalized on both of her break chances. Sakkari continued to win less than half of her service points while Wickmayer won 73% of her service points in the second set (despite a first serve percentage of just 55%). Sakkari is at her highest ranking of 182 and has seven ITF titles to her credit.

Gibbs, a Stanford graduate, cruised through the first set in only 28 minutes in the second semifinal match. She won 65% of her service points, while Brady won a paltry 32%.  Gibbs jumped to quick lead in the second set, going up 3-0 before Brady got on the scoreboard with a break of Gibbs’ serve in the fourth game and then converted another break in the eighth game to get back on serve, 4-4. Gibbs closed out the match giving up only one point in the final two games.

Gibbs, twenty-two years old, is currently ranked 122. She has won four ITF titles in her career and reached the third round at the 2014 U.S. Open, beating Caroline Garcia and Anastasia Pavlyuchenkova to get there. The twenty-year-old Brady is ranked 232 and has won two ITF titles.
Wickmayer and Gibbs have not faced each other previously at the WTA level.

Challenger Tour: Berrer into his first final of the season

The former world No.1 sheds some light on her future during an interview with Ubitennis at The All England club.

It is her love for tennis that has spurred Kim Clijsters to continue playing as a professional player for as long as possible.

The 39-year-old announced her third retirement from the sport earlier this year after her latest comeback. Troubled by injury and having her schedule affected by the COVID-19 pandemic, the Belgian played only five tournaments between 2020-2022 and lost her opening match at all of them. Although three of those matches went the full distance.

Clijsters has returned to Wimbledon this year once again but officially as a member of the legends contingent. A group of former players who play in events designated for them.

So what is the future plan for a Clijsters who has rightfully embedded her name in the sport as one of the best in recent years? During her career, she has won 41 WTA titles, spent 19 weeks as world No.1 and is the only player to have defeated the Williams sisters at multiple events (2002 WTA Championships and the 2009 US Open).

Speaking to Ubitennis at The All England Club, Clijsters hints that she may one day like to return to the Tour but not as a player….

UBITENNIS: How does it feel to be back at Wimbledon?

CLIJSTERS: It feels great. It’s always a special place to come back to. I haven’t been here for a few years and a lot of the infrastructure has changed. For me to be back here and see the legends and players I remember watching when I was younger is so much fun. Once you stop playing there are not a lot of people who understand the life that you have had. Then when you come and see everybody it is so natural. This was my family for years and years. You don’t see it as a family then but as you get older you do.

UBITENNIS: You recently retired from the sport. Is that you totally done now or is there still a temptation to come back?

CLIJSTERS: I’m done, done, done…. I do like to play legends tennis. I still love tennis and like to play every day if I can but with three kids it is a little complicated. It is still my passion and I love watching the sport.

CLIJSTERS: I think I do (want to work in tennis). The passion started for me when I was a little girl and I still believe I can help here and there. Whether it is helping the younger players that are playing at this stage.
There are definitely things I would like to do but with family life, traveling many weeks a year is complicated. But I do like to stay involved in tennis.

UBITENNIS: Who would be your dream player to coach?

CLIJSTERS: That is a tough question. maybe a younger player…

CLIJSTERS: Yea, a younger player. Amanda Anisimova and the girls who want to get to that next stage. Those who you have a connection with personality-wise. It’s tough to pick one out of the hat right now but I think that trust and connection on a personal level are really important if you want to get to the next step (as a player).