Challenger Circuit: Clay rehearsal for Ward and Edmund as they try to impress ahead of Davis Cup Final - UBITENNIS 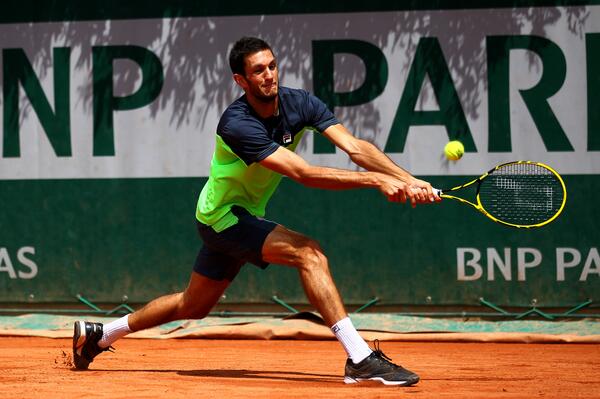 Can James Ward convince Leon Smith he deserves to play as the second singles player in the Davis Cup Final?

Yes the main season may be all but over, with only the Davis Cup and ATP World Tour Finals for the very top players to look forward to, but that does not mean that some very high class tennis is still going on.

The Challenger Circuit is a place where young players trying to climb the rankings play, old-timers trying to stay in the big-time, and even top players trying to recover ranking points after long-term injury. This week sees James Ward and Kyle Edmund try and gain some clay court action ahead of the Davis Cup Final against Belgium. Find out below where they’re playing and who they might come up against.

Mouilleron le Captif, France: If a Grand Slam were to be played on current ranking, Benoit Paire would be seeded (23). As it is, he’s playing a Challenger in France, where he’s the top seed. In fact all eight seeds are ranked in the top 100, with Adrian Mannarino, Lucas Pouille, Sergiy Stakhovsky, and  Marcel Granollers, very familiar names. Pouille will be looking to regain points dropped in Paris. Look out for: Karen Khachanov and Maxime Hamou.

There was an early win for second seed Mannarino, as he defeated Jonathan Eysseric 6-2, 7-6. Jan Mertl and Maxime Janvier join Mannarino in Rd 2 as other opening day victors.

Oritesi, Italy: Just the top two seeds ranked in the Top 100 here, in Ricardas Berankis and Evgeny Donskoy, but that doesn’t make for a less intriguing tournament! Third seed Rajeev Ram is still trying to ensure direct entry into next years Australian Open, and a good result here would aid that quest. Also, see if former Top 30 player Dmitry Tursunov can make an impact as a wildcard after battling injury the last few years. Look out for: Salvatore Caruso, who is a young Italian trying to climb the rankings.

Aldin Setkic caused the first shock of the tournament, defeating the flamboyant Dustin Brown, who was the fourth seed, 6-3, 6-7, 6-3. No such problems for seventh seed Mirza Basic, who progressed after three sets against Yannick Jankovits.

Buenos Aires, Argentina: Clay runs just about all year either on the main tour and/or the Challenger circuit. This is good news for recognisable names such as Federico Delbonis, Diego Schwartzmann, and Guido Pella, who all excel on the red stuff. The real news in Buenos Aires though, is the presence of James Ward and Kyle Edmund, both trying to impress Leon Smith to back-up Andy Murray in Belgium. Edmund is the fifth seed, and starts with a clay veteran in Andre Ghem, whilst Ward has been handed a favourable tie against lucky loser Hugo Dellien, but could face Rogerio Dutra Silva in Rd 2. Should Edmund win, his opponent is already known, as Renzo Olivo defeated Tomas Lipovsek Puches 7-5, 6-2.

Potential shock: (1) Federico Delbonis vs Gastao Elias: Elias is a tough competitor on clay, and a nightmare first round match-up for Delbonis. There may be more than 80 places between them in ranking, but Elias has won two-from-two against Delbonis in the past, including an encounter on clay.

Knoxville, USA: The American Challengers have scarcely seen such competitiveness in recent years, but the likes of Taylor Fritz, Stefan Kozlov Jared Donaldson, Tommy Paul, Noah Rubin, Francis Tiafoe make the likes of Ryan Harrison and Bjorn Fratangelo look like veterans in comparison. A true goldmine of potential future talent this week, and that’s without discussing seeds Malek Jaziri, and Austin Krajicek.  Potential shocks (and there are truly too many to mention here): (1) Jaziri vs Kozlov,(Jaziri lost in Rd 1 of Charlottesville last week) and (3) Smyczek vs Paul.

Look out for: Noah Rubin – flown a bit under the radar compared to the likes of Fritz and co, but leapt up more than two hundred places in the rankings last week by winning Charlottesville Challenger (def. Paul). He starts with a tough match against second see Austin Krajicek.

Roger Federer: ‘I know exactly what my game requires’

Alex Corretja: “Rafa Nadal is going to be ready to win Grand Slams again in 2016”