Roger Federer cruises to second round in Basel - UBITENNIS 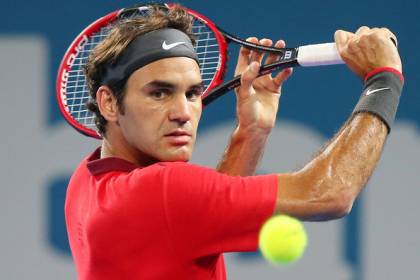 Local star Roger Federer made his eagerly-awaited debut against Mikhail Kukushkin in front of his local fans at the Swiss Indoor Open in Basel at the St.Jakobshalle.

Federer won his two previous head-to-head matches against the Kazakh player at Wimbledon in 2011 and in the Davis Cup quarter finals in 2014 in Geneva without dropping sets.

In last year’s edition of the Swiss Indoor Open Kukushkin beat the other Swiss star Stan Wawrinka in the first round with 6-4 6-7 6-3.

Federer won his first service game to love. In the second game he went up 0-40 on Kukushkin’s serve but the Kazakh player forced the game to deuce. Federer converted his break point on his fourth break point opportunity. He saved break point chances to hold his service game for 3-0. After 13 minutes Federer led 4-0. Kukushkin avoided the bagel winning his first game with his forehand winner but Federer closed out the first set in the next game after 21 minutes.

Federer could not convert break points in the first game of the second set. Kukushkin held his serve to take a 1-0 lead. Federer held his service game to draw level to 1-1. Kukushkin saved break points in a 5-minute third game to take a 2-1 lead. Federer hit his 20th winner to draw level to 2-2. Federer earned three break points and converted his second chance for 3-2 after Kukushkin made a double fault. Federer got the double break in the seventh game to pull away to 5-2 before serving out for the match after 54 minutes.

Federer hit 29 winners to 15 unforced errors. He converted only four of his break point chances but saved the two opportunities he faced. He won 91 percent of his first serve pointts 72 percent of his second serve points.

Federer will take on Philipp Kohlschreiber in the second round. The Basel native player leads 10-0 in his previous head-to-head matches against the German player.

Kohlschreiber overcame a second-set loss to beat Jerzy Janowicz with 6-4 3.6 6.3.

The Swiss Maestro has won the home tournament six times. Only once in 1998 Federer lost in the first round against André Agassi. The then 17-year-old player from Basel won just five games against the US legend.

Federer will donate his appearance fee in Basel to his Foundation,which helps disadvantaged children and promotes their access to education and sport.

Grigor Dimitrov beat Sergiy Stakhovsky 6-3 6-4 to set up a second round match against Rafa Nadal. Dimitrov, who is now ranked number 28, got an early break in the first set en route to winning the first set with 6-3. The Bulgarian player broke serve in the ninth game to take the 5-4 lead with two forehand passing shots before closing out in the next game.

John Isner beat Ernests Gulbis 6-3 6-4 taking a re-match for his defeat in their previous head-to-head match last week in Vienna. Isner hit 28 winners to 14 unforced errors and hit 19 aces and won 90 percent of his first serve points. Isner broke in the second game on his second opportunity. The match went on serve without break points until the ninth game when Isner served out for the first set. Gulbis wasted a break point in the sixth game of the second set. Isner converted his break point chance in the ninth game

Number 8 seed David Goffin fought back from a set down to overcome Andreas Seppi with 3-6 6-4 6-4. Seppi got a double break in the first and in the fifth games en route to taking a 4-1 lead. Goffin recovered one of the two breaks but Seppi sealed the first set with a third break. In the second set Goffin got a double break. Seppi recovered one of the two breaks but the Belgian closed out with 6-4 drawing level to 1-1 on sets. Goffin got an early break at the start of the second set. Seppi broke back to draw level to 4-4 but Goffin broke again for 5-4.

Richard Gasquet edged past Jiri Vesely 6-3 6-7 (2-7) 6-4. Gasquet broke serve in the second game of the first set. The Frenchman earned three set points on Vesely’s serve but failed to convert them. He closed out the first set in the next game. The second set went on serve without break points until the break point. Vesely got two-mini-breaks to win the tie-break with 7-2 forcing the match to the third set. Vesely did not convert two break points in the fourth game. Gasquet also had break points in the seventh game but he failed to convert them. In the 10th game Gasquet earned a break point at 30-all. This time he clinched the break to win the decider with 6-4. Gasquet will face Dominic Thiem in the second round.