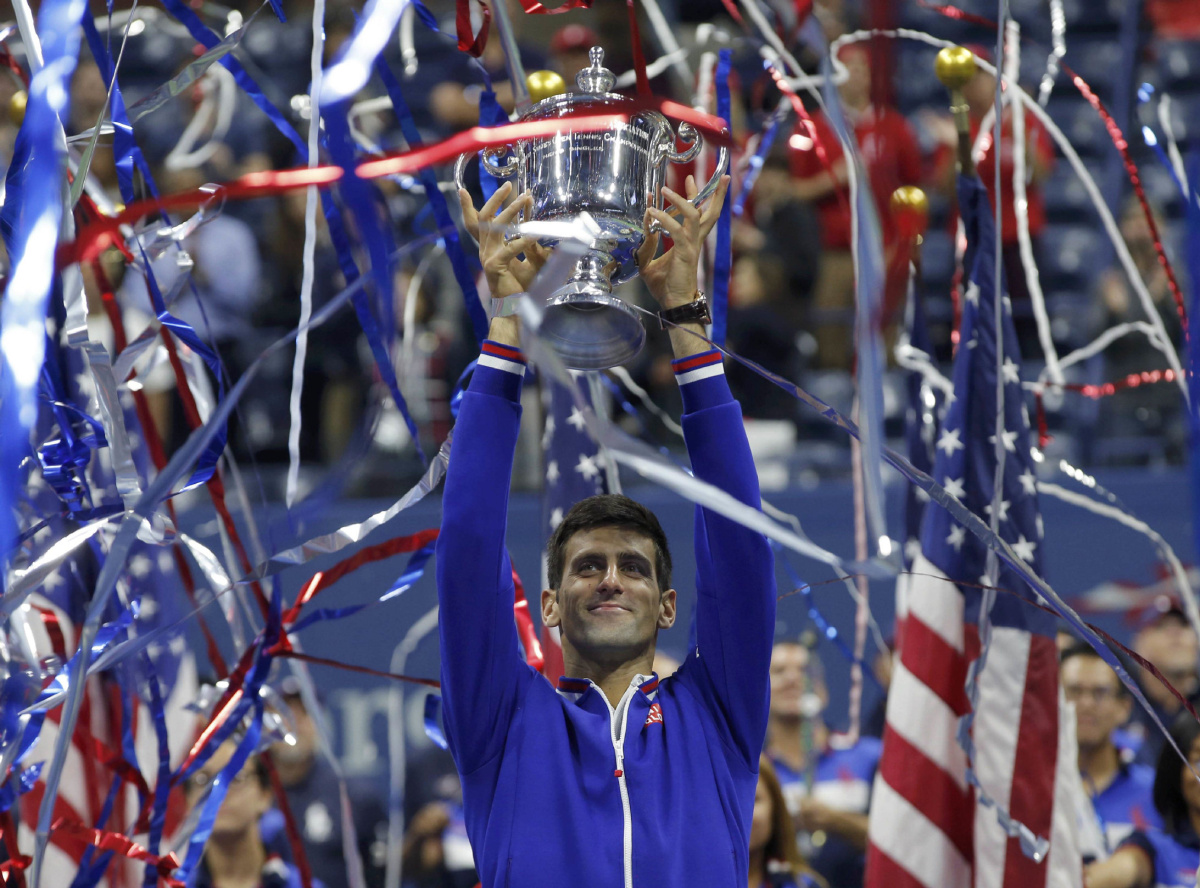 US OPEN – Roger Federer (2) winning his 18th major was not to be at this year’s US Open. Novak Djokovic (1) denied his that privilege of extending his all-time singles major titles when he defeated him 6-4 5-7 6-4 6-4 in 3 hours and 20 minutes. It was a thrilling match up as this was the 42nd meeting between the two. With this victory the head to head is tied at 21 wins each. For the Djokovic’s fans, their man played a wonderful match against one of the best the sport has ever produced. On the other hands, Federer’s fans will be ruing this loss for a long time. The Swiss player had so many opportunities to make the match far more compelling and perhaps even eek out the win but in the end Djokovic proved to be far too strong and superior in the big moments.

This match slated for a 4:00 pm start time did not begin until around 7:15 pm. This delay may have perhaps put off Federer for it appeared as though he left his service game in the locker room. Federer elected to serve to start the match but it soon became apparent that the stellar serving that was on full display this summer hardcourt season was not on the court on this day. Djokovic had three break points in that initial game alone and Federer just barely held serve winning the final two points of that 16-point game. In the 2nd Federer service game, he went down 0-40 allowing Djokovic to break him and get out to an early lead at 2-1. Federer broke back as Djokovic was left flailing and falling to the court, bruising himself in the process. However, the Serb would not let minor injuries deter him as broke Federer again for 4-3. He maintained this lead to take the set 6-4 in 41 minutes.

In the second set, Federer came out strong. He was the far more aggressive of the two players on court. However, the problem was that his aggression was not getting him ahead in the match. In fact it was putting him in trouble when he kept creating break opportunities for himself only to let them slip away. It was only at the last possible opportunity to break, in the 12th game, up 6-5, having already squandered 3 previous set points, that he finally converted on his 9th break point of the set with a backhand swinging volley that proved unreturnable by Djokovic. Federer won the set 7-5 to level the match at a set apiece. The crowd was squarely behind Federer but this momentum was not able to lift the erratic Federer to high playing level. He was broken early in the 3rd set but broke back to level it 2-2. Again the break opportunities he earned went unconverted as he could not keep the ball in play. Djokovic on the other hand did not let his limited break opportunities go begging. He broke Federer in the 9th game for 5-4 and served it out for a 2-1 sets lead in the match.

Djokovic just looked the far superior player. Federer was moving well but Djokovic was so much the better athlete on the day. What was even more impressive from the Serb was his mental composure as he withstood the barrage from the clearly partisan crowd. Djokovic broke Federer to start the 4th set denying Federer two game points. Djokovic broke Federer again in the 7th game for a 5-2 and the match looked over at this point. In what would be a common theme of the match, Federer continued to waste break points especially when he clearly had the advantage in the point. Nonetheless, sensing it was either do or die, Federer broke Djokovic as he served for the match in the 8th game. Federer held serve for 4-5 and saw double break points as Djokovic attempted to serve for the match for the 2nd time. Federer simply could not convert his 22nd and 23rd break points. Djokovic muscled the ball over the net and Federer shot went flying. Djokovic collected his 2nd US Open title in 5 years 6-4 5-7 6-4 6-4.

Looking at the match statistics, the most glaring figures would be the fact that Federer was only 4/23 on break points and that Djokovic saved 19/23 break points. What was even worst was the fact that 11 of those break points, Federer had a 2nd serve to handle but only converted on one of those opportunities. After failing to convert those 3 break points in the opening game of the match, Djokovic was 6/10 for the rest of the match, 4/5 in the last two sets. Federer was 2/11 for the final two sets. Another real clear difference in the match were the number of errors Federer was making. He has 54 unforced errors for the match and in many cases they were careless strokes. So  many of those shots went wide of the mark for no good reason. Djokovic had 37 unforced errors. Federer’s 2nd serve was a huge liability for him as he was only winning 46% of the points compared to his 63% performance in his semifinal match against Stan Wawrinka. on Day Fourteen of the 2015 US Open at the USTA Billie Jean King National Tennis Center on September 13, 2015 in the Flushing neighborhood of the Queens borough of New York City.

This major win was the 7th title for Djokovic this year. There is no question that he is by far the number one player in the world with a very impressive season thus far. He has made it to all four major finals in one year for the first time of his career. He won three of those titles, losing the French Open to Wawrinka. He has made it to 6 ATP Master Series 1000 tournaments going 4-2 in the finals  Every single tournament that Djokovic has entered for the year, he has made it to the finals for an overall record of 7-4. His lone losses for the year have only been to players ranked in the top 5, Federer, Andy Murray and Stan Wawrinka. It must be great to be him right now. Nonetheless, it must be said that it was a very impressive Roger Federer on court. He definitely brought excitement to the tournament which saw its biggest story, Serena’s Calendar Grand Slam, go by wayside on Friday. The Swiss promised the New York City crowd that he would be back next year for another US Open title run.

Novak Djokovic: “I feel more complete as a player”

Novak Djokovic vs. Roger Federer: The Latest Match In A Titanic Rivalry