TENNIS US OPEN – Flavia Pennetta has overcome Casey Dellacqua in straight sets to capture her fifth quarter-finals’ appearance at the US Open with a 7-5 6-2 score.

Both players appeared very nervous throughout the first set, so the score reflected this with several breaks for both sides. Pennetta found a better solidity at the end of the set and this opened a gap between the two players, with the Italian winning seven consecutive games.

Dellacqua tried a mild reaction, helped by a small gap in the 11th’s seed focus, but the margin was secure enough for Pennetta to close.

The two players had met only once before and it was many years ago in Bangkok, when Pennetta had won in three difficult sets.

It seemed as if such a scenario could be repeated, only because the tension and the difficult humid conditions affected the level of game from both players, who had a lot of problems to play many good points in a row.

Twice the Italian led the set and seemed to be able to run away, but a shaky serve and several unforced errors always let the Australian come back.

The 29th seed found a good moment to go 5-4 up and pushed Pennetta against the wall on her service game by going 30-15, but the Italian upped her game right in time to force many errors from the other side.

After taking the first set 7-5, last year’s semi-finalist found the calm she needed to execute her game and thanks to great backhands and some lovely drops, she flew to 4-0.

Pennetta had some chances to close the match earlier, but a few errors kept the Australian alive. In the end, with a flawless service game, the Italian secured her ticket to the last eight of a slam for the second time this year.

The Italian will wait for the winner of the match between Serena Williams and Kaia Kanepi.

Petra Martic cruised to an emphatic 6-0 6-3 victory over Alison Van Uytvanck in the first round of the Palermo Ladies Open to get her return to competitive action off to an ideal start.

The Croatian, 29, is the top seed at the event and, in her pre-tournament interview, she seemed to relish the opportunity to return to the tennis court.

“It’s been so long without tennis, without competition, without the adrenaline that we all kind of love,” Martic said. “So I’m just going to try to enjoy myself. To be back on the court right now is really just a privilege without thinking about any results or any goals or focused on numbers or anything else.”

The Croatian may not be thinking about numbers, but hers were impressive today. She won 71% of all points behind her serve and 49% when returning serve. Furthermore, she broke Van Uytvanck four times and looked in complete control throughout the match, which lasted just 67 minutes.

“I’m really happy with today’s performance,” Martic said in her on-court interview. “I played better than expected. I tried to go out with no expectations because nobody played for five months.”

The Croatian was also asked whether she thinks surprising results are more likely considering everyone is short on match practice. She replied, “I don’t think that’s something new. It’s been like that for a long time in women’s tennis. Anyone can win on a given day.”

Having beaten the World No.57, Martic will now face the World No.119: Liudmila Samsonova. The young Russian came through qualifying and then stunned veteran Kirsten Flipkens in the first round.

In the last match of the day, fourth seed Annet Kontaveit booked her place in the second round with a 6-3 6-3 win over Patricia Maria Tig.

While the score line may look comfortable, the Estonian had to work hard to overcome a determined display from the Romanian. In the end, victory took 106 minutes to complete.

“It was really exciting to play my first match,” Kontaveit said in her on-court interview. “It was great to step back on court and play a WTA tournament.”

She continued, “It was very competitive. I think I played important points quite well. There are things I could have done better but I’m pretty happy.”

The Estonian’s reward is a last-16 clash with Laura Siegemund. The German, ranked 63, is often a tricky opponent, and Kontaveit should be particularly wary of her capabilities on clay as it is her favourite surface.

Five seeded players are safely through to the second round at the Palermo Ladies Open. But the fifth seed Elise Mertens is not one of them. She suffered a disappointing 6-4 6-1 loss to World No.110 Aliaksandra Sasnovich. 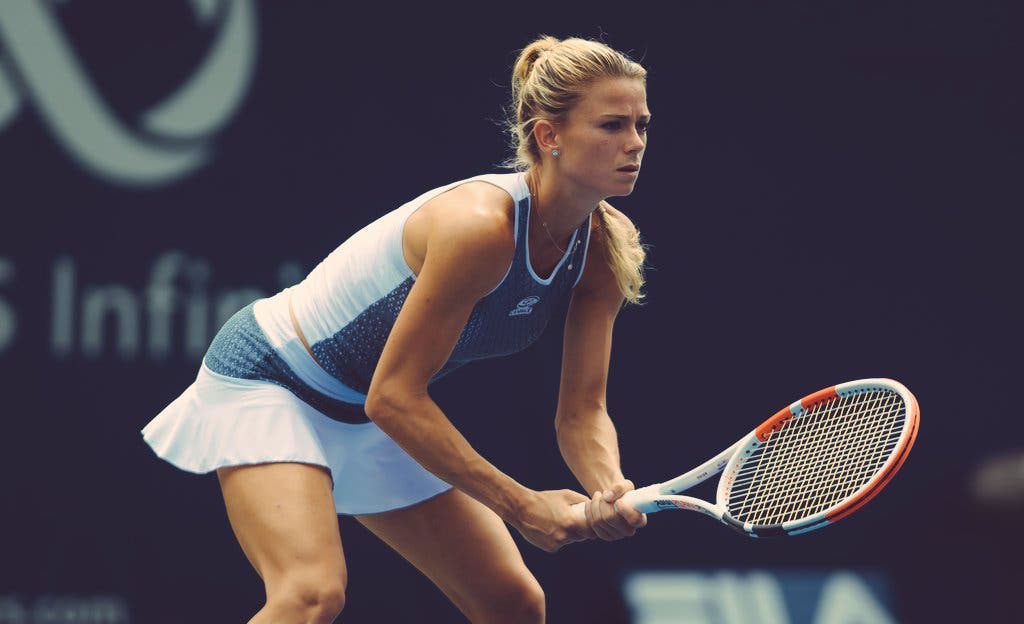 Italian star Camila Giorgi recovered from a slow start to edge Rebecca Peterson 7-5 6-4 reaching the second round at the 31st edition of the Ladies Open in Palermo.

Giorgi broke twice in the first and third games to open up a 4-0 lead before Peterson won three consecutive games. The Swedish player pulled one break back in the eighth game to claw her way back to 3-5. Giorgi earned a match point with a service winner and closed out the match as Peterson hit a forehand past the baseline.

“At the start of the match, I was a little slow in the legs a bit. I played my game more in the second set, playing faster, so I took advantage in the second set. There were not too many options to practice, but I worked with a physicla trainer. It was only in the past few weeks that I got to start practicing again. For the most part, I spent time with my family. We have spent so much time travelling over the years. It was nice just to be at home. Italian players are doing at this tournament. Here in Palermo it would be nice to have an all-Italian final”,  said Giorgi.

Giorgi will face 19-year-old Slovenian qualifier Kaja Juvan, who came back from a set and 4-5 down to beat last year’s Roland Garros finalist Marketa Vondrousova 1-6 7-5 6-4. Juvan, who came through the qualifying round, scored the biggest win of her career. Vondrousova made a major breakthrough last year when she reached the Roland Garros final, but her progress was hampered by a serious injury. After Wimbledon she underwent surgery.

Juvan broke two breaks to open up a 4-0 lead with two breaks. Vondrousova got one break back to claw her way back to 2-4, but Juvan earned her third break in the seventh game. Vondrousova recovered another break in the eighth game, but Juvan saved three break points to hold her serve in the 10th game to win the third set 6-4.

“Obviously this top 20 win is motivation to keep playing. I try not to think about the rankings too much. I just want to play as many matches as I can right now”, said Juvan.